The question is: given the coordinates of A and B, how do we determine the distance between them? The answer to this question is provided by the distance formula, which is nothing but a simple application of the Pythagoras Theorem, and yet, it is one of the most fundamental results of coordinate geometry. 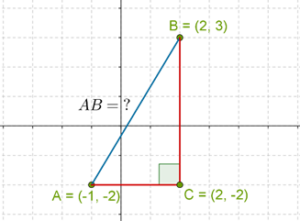 In this right triangle, AB is the hypotenuse, and so it can be calculated using the Pythagoras Theorem, if we know the values of AC and BC. Consider AC for a moment. It is parallel to the x axis. This means that its length will simply be the difference between the x coordinate of the rightmost point on it, which is C, and the x coordinate of the leftmost point on it, which is A. Thus,

Now that we have AC and BC, AB can be calculated using the Pythagoras Theorem:

Once again, note that the actual distance covered by Bono (along the random, wiggly path) will be different (greater) than the distance between his initial and final positions: This distinction will become extremely important later on in your studies.