Go back to  'Probability' 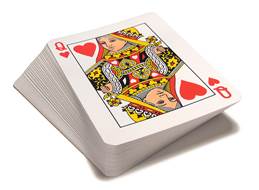 Consider as your random experiment the drawing of a card from this deck. The sample space has 52 outcomes in this case.

Suppose that the deck is well-shuffled. In such a scenario, no outcome will be particularly preferred over another outcome. Thus, if the experiment is repeated a large number of times (if you draw a card a large number of times, with the deck being well-shuffled each time), then the relative occurrence of any one particular outcome will approach \(\frac{1}{{52}}\). Thus, the probability of each outcome of the sample space is \(\frac{1}{{52}}\).

Note that from the perspective of probability, a well-shuffled deck is analogous to a fair coin or a fair, non-loaded die. For all three, each outcome in the sample space is equally likely.

Now, for a well-shuffled deck, suppose that you define an event E as drawing a red card, and an event F as drawing a card of Spades. Event E has 26 possible outcomes (13 Diamonds + 13 Hearts), while event F has 13 outcomes (the 13 cards of Spades). Thus,

Example 1: A card is drawn from a well-shuffled deck. Find the probability of the card either being red or a King card.

The probability of E occurring will be