The system which we have described to label points in a plane is known as the Cartesian System. It was first described by a French mathematician named Rene Descartes in the 17th century. The word Cartesian is derived from Descartes.

The two axes (X and Y) divide the plane into four regions, or quadrants. These are numbered as follows: 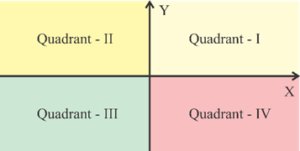 In each quadrant, the signs of the coordinates will be different:

Can you see why this is true? We also note the following:

The most powerful property of the Cartesian System is that using this, any point in the plane can be uniquely labeled:

Suppose that you are asked to plot the point P = (2,3) in the plane. How will you do it? Starting from O (the origin), you will move 2 units to the right, along the X-axis, and then 3 units up, parallel to the Y-axis. The point you reach will be the point P: This way, you can plot any point in the plane, given its coordinates.

Example 1: Plot the following points in the Cartesian plane:

Solution: We note that A, B, C and D are respectively in the first, second, third and fourth quadrants: Example 2: A number of points are given to you in the plane:

a) Which points lie in either the first or the third quadrants?

b) Which points lie in either the second of the fourth quadrants?

c) Which points lie on one of the two axes?

Solution: All the seven points have been plotted below; observe this plot carefully: a) A and E lie in the first quadrant, and D lies in the third quadrant.

Example 3:A person rolls two rolling dice at the same time. Let the numbers which show on Die - 1 and Die - 2 be represented by x and y respectively. After each roll, the point P(x, y) is plotted in the plane. Plot all the possible positions of P, and highlight those positions for which the sum of x and y is 8.

Solution: Note that on each die, we can have 6 numbers (integers from 1 to 6). Thus, if you combine the possible numbers from both dice, you have 36 pairs. For example, there are six pairs with the number 3 on Die - 1:

In all, there will be 36 pairs (list them out if you are unsure about this). Now, the pairs for which the sum of x and y is 8, are: 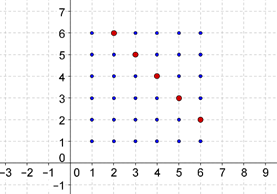 Example 4: Plot five points in the Cartesian plane for which the abscissa and ordinate are equal.

Solution: We will plot the following five points:

The plot is shown below: Note an interesting fact. These five points lie on the same straight line: In fact, if you are to take any point on this line, its abscissa and ordinate will turn out to be equal! Try it. Can you intuitively justify why this should be so?