Is There an AAS Criterion?

Is There an AAS Criterion?

Think: But will the ASA criterion hold if the equal sides are non-included? In other words, is there something like an AAS criterion?

The answer, as you may be able to anticipate, is YES! If two angles of a triangle are equal to two angles of another, then their third angles are automatically equal, since the sum of angles in any triangle must be a constant (\(180^\circ \)). 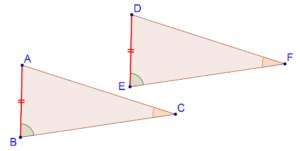 Can we say that the two triangles are congruent? YES, because \(\angle A\) and \(\angle D\) must also be equal, and thus our ASA congruence criterion applies as we discussed earlier.

✍Note: To summarize: when we have to apply the ASA congruence criterion between two triangles, we only need to check that: