In the verge of coronavirus pandemic, we are providing FREE access to our entire Online Curriculum to ensure Learning Doesn't STOP!
Home
Jee
Circles
Examples on Tangents to Circle Set 2
Home
+2 more...
Exam...et 2

Examples On Tangents To Circles Set-2

Refer to Fig - 18. Suppose that \(A\) and \(B\), the points of contact of the two tangents, are joined. What will be the equation to this chord of contact ?

Since the two tangents intersect at \(P\), the co-ordinates of \(P\) must satisfy the system of equations I. Thus,

We can write this obtained equation concisely as

As an example, the chord of contact for the two tangents drawn from the  origin to the circle

Notice that the line \(PAB\) passes through the fixed point \(P\). What is variable about it is its slope, which we assume to be \(\tan \theta \). Thus, using the polar form for the lines, we obtain the equation of \(PAB\) as

You are urged to prove this result using ‘pure’ geometry. 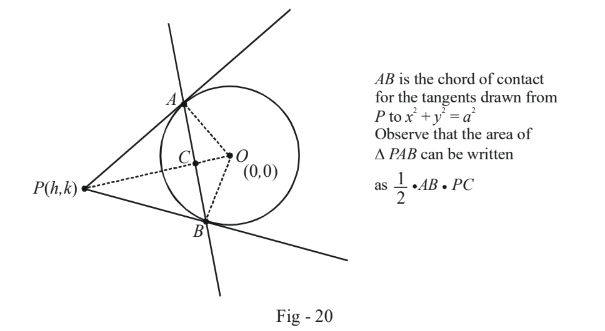 Observe that \(\Delta OAC\) is similar to \(\Delta OAP\). Thus, the ratio of the corresponding sides is equal.

Observe that this question was solved mostly through ‘pure’ geometrical considerations. A pure co-ordinate approach for the area of the triangle can be followed but you can expect it to be much longer. Thus, in this subject, you have to put your intuitive skills to the best use possible to determine the shortest approach.

Let us consider another example here itself which will show why a pure geometrical approach is better sometimes than using co-ordinates.

Obviously, this angle should be the same for any point chosen on \({S_1}\) since the circles are perfectly symmetrical figures. Let us draw a diagram corresponding to this situation:

As explained in the diagram, the angle between the two tangents can be evaluated by simple geometric considerations to be \(2\alpha .\) Although this example is more or less trivial, the contrast between pure geometric and co-ordinate approach will become more apparent in some subsequent examples.