Examples on Permutations and Combinations Set 3

12 person are sitting in a row. In how many ways can we select 4 persons out of this group such that no two are sitting adjacent in the row?

Solution:   To make the question more clear, here’s a valid and a non-valid selection: 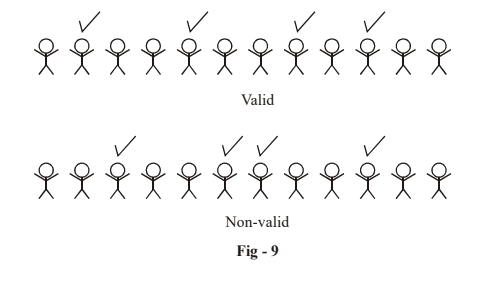 We have to find some (mathematical) way of specifying a valid-selection. An obvious method that strikes is this: In our row, we represent every unselected person by U and every selected person by S. Thus, the valid selection in the figure above becomes:

To count such permutation, we first fix the 8 “U” symbols. There will then be 9 blank spaces generated for the “S” symbols as shown below:

From these 9 blank spaces, any 4 spaces can be chosen and the “S” symbols can be put there and it’ll be guaranteed that no two “S” symbols will be adjacent. Thus, our task now reduces to just selecting 4 blank spaces out of the 9 available to us, which can be done simply in \(^9{C_4}\)  ways.

These are the required number of selections.

We will use a standard pack of 52 cards to illustrate the concepts involved.

On the other hand, suppose you were playing a game of Bluff with 3 other people. Before starting the game, you divide the deck into 4 sets of 13 cards each. But now you have to give each set of 13 cards to a different person. Where a set of cards goes matters. In other words, the order of the groups matters.

Once again, make sure that you understand very clearly when the order of the groups matters and when it doesn’t

Thus, the division can be carried out in

However, notice that the order of the groups doesn’t matter, as discussed earlier. This means that even if our order of group selection was BACD or ADBC (or for that matter any other permutation of ABCD), such a selection would essentially be the same as ABCD.

Thus, the actual number of ways of division is

(b) (i) For this part, observe that the group sizes are all unequal. This is a somewhat different situation than the previous part where the group sizes were equal. We’ll soon see why.

We follow a similar sequence of steps as described earlier.

(iv) This automatically leaves group D of the remaining 16 cards.

The number of ways for this division is

Why don’t we divide by 4! here as we did earlier, even when the order of groups doesn’t   matter? This is because the group sizes are unequal. A particular selection in a particular order, say ABCD, will never be repeated in any other order of selection.

Our order of selection (in terms of group size) is 9, 13, 14 and 16 cards. Carefully think about it; a particular selection like ABCD will be done only once (and not 4! times as in the previous part due to equal group sizes)

(ii)  If we had to distribute the 4 sets to 4 players, the situation changes because which subset of cards goes to which player matters. A particular group of sets of cards, say ABCD, can be distributed among the 4 players in 4! ways. Thus, now the number of distributions will be

(c)  (i)   In this part, the situation is a hybrid of the previous two parts. 3 of the 4 groups are equal in size while the 4th  is different.

(Division by 3! is required since the order of groups doesn’t  matter. Thus, a particular order of 15-card groups, say ABC, is, for example, the same as ACB)

Thus, the required number of ways is

(ii)  For the second question where we have 4 players and we want to give them 10, 14, 14 and 14 cards, we already have obtained the number of possible division in (1). To distribute the subsets, each division of 4 sets can be given to the 4 players in 4! ways. Thus,  the number of distributions of the 4 subsets is

(iii)             Finally, we now have two sets of one size and two of another size. We first just carry out the division into subsets, without assigning any subset to any player.

This can be done in

Once the division of the deck into the 4 subsets has been accomplished, we assign a subset to each of the 4 players. This can be done in 4! ways.

Therefore, the possible number of ways of distribution of the cards to the 4 players is

In this example, we talk about circular permutations, i.e., arrangements in a circular fashion

(a)  In how many ways can n people be seated around a circular table?

(b) We have a group of 5 men and 5 women. In how many ways can we seat this group around a circular table such that:

(c)  In how many ways can a necklace be formed from n different beads?

Consider the letters A, B, C and D. The 4 linear permutations ABCD, BCDA, CDAB and DABC correspond to a single circular permutation as shown in the figure below: 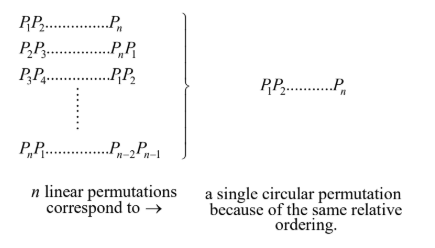 (c)  The situation of a necklace is slightly different than that of seating people around a circular table. The reason is as follows:

Suppose we have 5 beads A, B, C, D and E. Consider two circular necklaces of these 5 beads 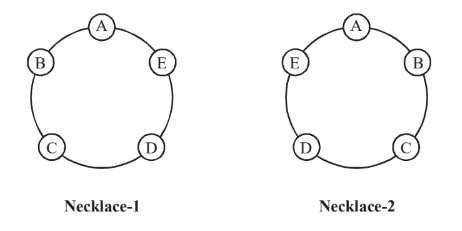 Are  these two necklaces different? No, because a-necklace can be worn from both ways. Necklace-2 is the same as necklace-1 if I look into it from the other side of the page. In other words, for a necklace, a clockwise permutation and its corresponding anti-clockwise permutation are identical. Thus, the number of circular permutations would reduce by a factor of two, i.e., the number of different necklaces possible is \(\begin{align}\frac{1}{2}(n - 1)!\end{align}.\)

Q. 1 How many words can be made with the letters of the word “TECHNOLOGY” which do not begin  with T but end with Y ?

Q. 2 In how many ways can the letters of the word CINEMA be arranged so that the order of vowels do not change?

Q. 3 How many sides are there in a polygon which has 35 diagonals?

Q. 4 In how many ways can 6 boys and 4 girls sit in a row so that no boy is between two girls?

Q. 5 How many words can be made with the letters of the word BHARATI so that all the vowels are consecutive?

Q. 7 How many words can be made with the letters of the word INSTITUTION such that vowels and consonants alternate?

Q. 8 How many different committees of 5 members can be formed from 6 men and 4 ladies if each committee is to contain at least one lady?

Q. 9 Six Xs are to be placed in the squares of the given figure, such that each row contains at least one X. In how many different ways can this be done?

Q. 10 In how many ways can 16 identical mangoes be distributed among 4 persons if none gets less than 3 mangoes?