Go back to  'Complex Numbers'

Since  \(i \notin \mathbb{R},\) we cannot locate \(i \) anywhere on this real line. However, what we can do is draw another line perpendicular to the real line, passing through 0, and associate \(i\) with one unit of length on this new line, which we can term as the imaginary line: Does this make sense? It turns out that this way of associating real numbers with the (horizontal) real line and ‘imaginary’ numbers (of the form \(ki,\) where \(k\) is itself real and represents the displacement of that number from 0, on the vertical line) with the (vertical) imaginary line is extremely powerful and useful. A little thought will show you that using this representation, any point on the entire plane can be assigned a unique ‘number’. 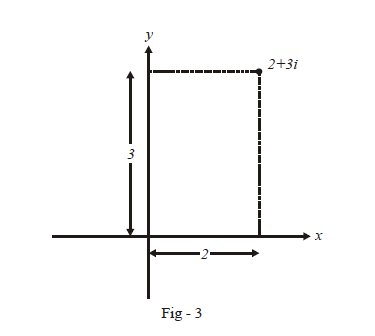 This number has both a ‘real’ as well as an ‘imaginary part’.

Similarly, any other point anywhere can be represented uniquely using a single ‘number’ \(x + iy.\)

Thus, we have managed to develop a new number system, consisting of ‘numbers’ of the form \(x + iy,\) where \(x,y \in \mathbb{R}.\)  We will call such numbers (again due to the convention followed) complex numbers; \(\mathbb{C}\)  is the set of all complex numbers

From all this discussion, it does seem after all that \(i\) is a valid mathematical entity. Associating i with a unit length on the y-axis gives us a number system \(\mathbb{C}\)  capable of representing the entire plane and hence \(\mathbb{C}\)  seems to be a valid ‘improvement’ or extension over \(\mathbb{R}\)  . However it is not just sufficient to define a number system and give it some geometrical significance ourselves. We must also show that the various operations that we use in other number systems, like addition, subtraction, multiplication, and division can also somehow be applied in the set \(\mathbb{C}\),e complex number system ensures in a consistent manner. Apart from this, we must also show that these operations are consistent with the geometrical significance that we have given to complex numbers.

This is the subject of the next two sections. As a conclusion to this section, you might find it satisfying to know that any polynomial equation of degree \(n\) is solvable in \(\mathbb{C}\) , and has \(n\) roots lying in \(\mathbb{C}\).

both are non-real (complex)

the other two are non-real (complex)

Thus, the complex number system ensures the complete solvability of any polynomial equation, which was not possible with just the real number set.

Finally, so that you are clear about it, we mention right here that \(i\) does exist, in the sense that it has a valid mathematical and physical significance, just as real numbers do. \(i\) is not just an arbitrary figment of our imaginations  - so in that sense, the term ‘imaginary numbers’ is misleading.