Go back to  'Parabola'

In the course of the next three chapters, we’ll be studying conic sections, which as the name suggests, have something to do with sections of a cone. Different ways of cutting a cone using a plane will give rise to different conics.

We consider a (three-dimensional) double right circular as shown in the figure below, extended to infinity on both sides, and with a semi-vertical angle \(\theta \).

Now we use a plane to cut this double cone. Refer to the next figure and see that, depending on how we orient our plane, we give rise to The next figure shows that even straight lines, pairs of straight lines and in fact even a point can be considered as sections of a cone. This is because these can be formed if the intersecting plane passes through the vertex of the double cone. 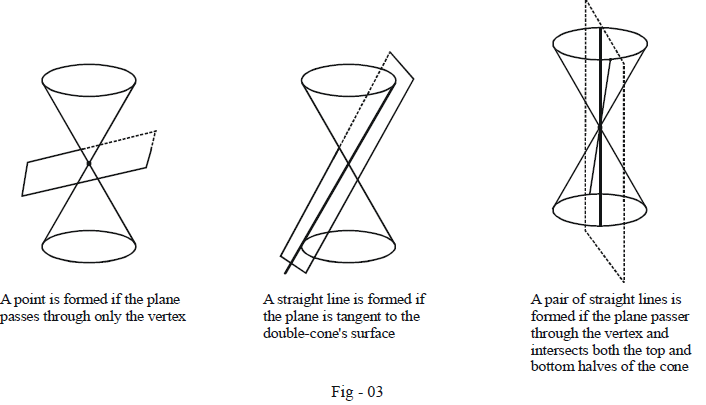 For a circle, the eccentricity e is 0 because while the fixed point (the focus) is the centre of the circle, the fixed line is assumed to be at infinity. Thus, PX in the figure above always remains infinitely large so that e = 0.

For the remaining conic sections, we have

Our discussions in this and the next two chapter deal separately with these three types of conics.