Consider n points in a plane such that no three of them are collinear. These n points are joined in all possible ways by straight lines. Of these straight lines so formed, no two are parallel and no three are concurrent. Find the number of the points of intersection of these lines exclusive of the original n points.

Solution:   To gain more insight into the problem, let us consider the case when n = 4. 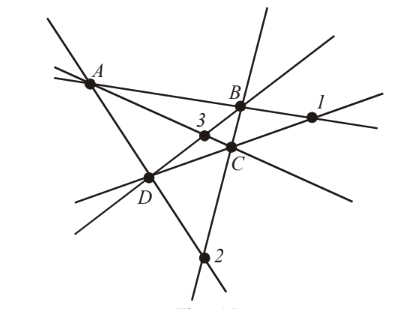 We originally have 4 points in the plane labelled as A, B, C and D. When we draw all the straight lines possible (by joining every possible pair of points), we see that 3 new intersection points are generated, labelled as 1, 2 and 3.

As we now discuss the general case, refer to this figure for help.

Thus, the actual number of new intersection points is

Verify that this formula works for n = 4

How many 4 letters strings can be formed from the letters of the work INEFFECTIVE ?

Solution: Observe that some letters repeat more than once:

This means that our string of 4 letters could contain repeated letters. (It’s thus obvious that we cannot  straightway use \({}^n{P_r}\)  to evaluate the number of strings.

In such a case, we divide the types of strings that we can form into different mutually exclusive cases:

For example, the string “EFEF” will be such a string.

The total number of such strings is therefore 3×6=18.

Case 4: 3 letters are the same, the 4th is different

Verify that these four cases are mutually exclusive and they exhaust all the possibilities.

(a) In how many ways can 3 girls and 9 boys be seated in 2 vans, each having numbered seats with 3 seats in the front and 4 seats at the back?

(b) How many seating arrangements are possible if 3 girls should sit together in a back row on adjacent seats?

(b) Since the 3 girls need to be seated together in one back row, we first select the back row. This can be done in 2 ways since there are 2 vans. In this row, 3 adjacent seats can be selected in 2 ways.

In the 3 adjacent seats, the 3 girls can be permuted in 3! ways.

We have 3n objects, of which n are identical and the rest are all different. In how many ways can we select n objects from this group ?

A closed-form expression for S can be obtained by the following manipulation :