Solution: The approach lies in realizing the general properties of a perfect square. Note that a square will have, at its unit place, a digit from amongst the set {1, 4, 5, 6, 9}. It cannot have a ‘3’ or an ‘8’ as its unit digit. Work it out yourself.

Now, for the given sum, the first four terms add to 33:

For any integer greater than 4, its factorial will always have a ‘0’ at its unit place. Can you see why?

This means that the given sum will have a ‘3’ at its unit place, so it cannot be a perfect square!

A set P contains x elements while Q is another set which contains y elements. How many functions  \(f:P \to Q\) exist which are (a) one - one (b) onto?

Solution: Obviously, the total number of functions possible is \({y^x}\)

(a) If the function is to be one-one, y, the number of elements in the co-domain of f, must be greater than or equal to x :

(b)   For the function to be onto, the only constraint that needs to be satisfied is that each element in the co-domain Q must have a pre-image, which means that x must be greater than or equal to y.

The remaining part is left to the reader as an exercise.

Four non-identical dice are rolled simultaneously. How many rolls are possible in which 6 shows up on at least  one dice?

Solution: Its easiest to proceed by considering the complementary case:

Now, a very important issue which we leave to you to resolve: what if the four dice were identical?

In an examination, the maximum marks for each of three papers is n and that for the fourth paper is 2n. Find the number of ways in which a candidate can get 3n marks.

Solution: We need to find the number of solutions to the non-negative integral solution

When   \(P(x)\)  is expanded , each of these three brackets can contribute at the most an n th power in x, whereas the fourth bracket can contribute upto  2n in powers of x.

Why ? Because, each time  \({x^{3n}}\) is formed is a unique combination of power contribution from each of the four brackets. For example,

To find out the coefficient, you’ll have to wait until you are familiar with the Binomial / Multinomial expansion.

In how many ways can one fill an m × n table with  \( \pm 1\) such that the product of the entries in each row and each column equals –1?

If we denote by

Hence (*) holds if and only if m and n have the same parity.

For those of you interested in cards, here is a very interesting card trick that has its basis in an elementary application of this chapter’s concepts.

The magician then thinks for a while and tells the audience the number and suit on the fifth secret card ! We have to figure exactly how the assistant conveys the information about the fifth card to the magician. You can assume that no one is cheating!

The first issue is that, of the 2 cards of the same suit, how does the assistant decide which one to reveal and which one to keep secret?

For that, the assistant refers to the following diagram (mentally of course!): 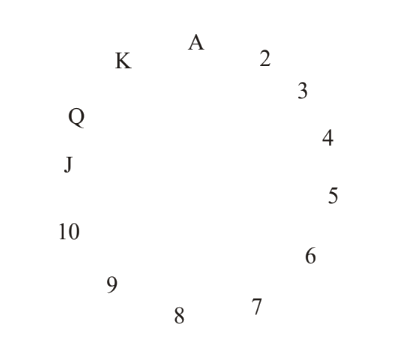 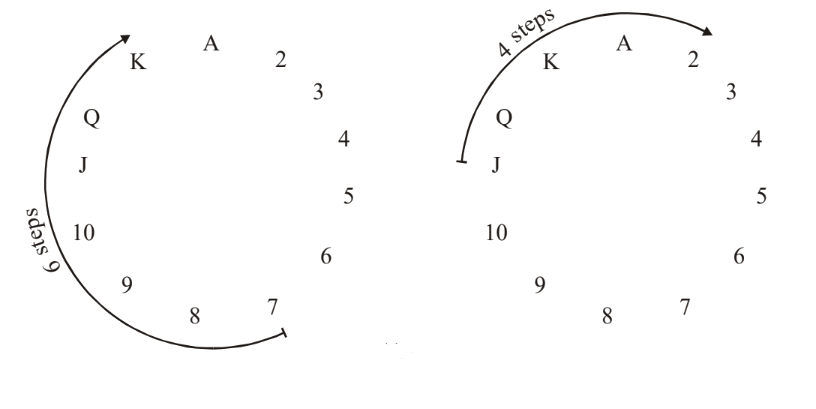 Thus, of the 2 cards of the same suit, the assistant reveals that card from which it is possible to reach the other card in at most 6 steps.

For example, if the assistant finds a “J” of Hearts and a “2” of Hearts in the 5 drawn cards, he will reveal the “J” of Hearts first and keep the “2” of Hearts secret since in our circular arrangement it is possible to reach from “J” to “2” in 4 steps.

We now require a scheme whereby the assistant can communicate the offset to the magician.

For this purpose, they pre-decide upon an order of all the 52 cards of the deck. For example, suppose they order the deck like follows:

To communicate the offset to the magician, the assistant reveals the 3 cards in a particular order as shown in the table below

Since the maximum offset can be 6, the 6 permutations of S, M and L cover all the possible offsets!

Once the offset is communicated, the magician simply adds it to the first card to deduce the fifth, secret card!

Therefore, “2 of Hearts” is the first card that the assistant reveals.

To communicate the offset, the assistant orders the three other cards (to be revealed) according to Fig. 19 as follows:

Since the offset required is 5, the assistant reveals these three cards (according to the Table on the previous page) in the order L S M.

Thus, this is what the assistant says:

The magician thinks for a while and says, “The  fifth card is the 7 of Hearts !” And the audience gasps!