The LCM or Lowest Common Multiple is essential in solving the addition, and subtraction of simple fractions where denominators are different. By using the LCM we can make the Denominators the same which will make the whole process very easy.

In real life, LCM is used to solve the problems related to Racetracks or Traffic lights, etc.

In this article, we will discuss the method of finding LCM, The properties of the LCM.

Before discussing the Lowest Common Multiple, we need to know, What is Multiple?

In mathematics, Multiples are the products of Natural Numbers.

When a and b both are Natural Numbers and b is a multiple of a then a is called a divisor or factor of b. 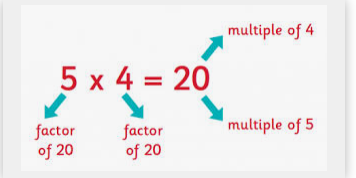 For two or more given sets of Natural numbers, LCM is the smallest number that is evenly divisible by all the given natural numbers in the set.

Along with the Lowest common multiple, one more important thing is there we need to know about, that is HCF or Highest common factor which is also known as GCF or Greatest Common factor.

There are five different methods to find the LCM of a given set of Natural numbers, They are 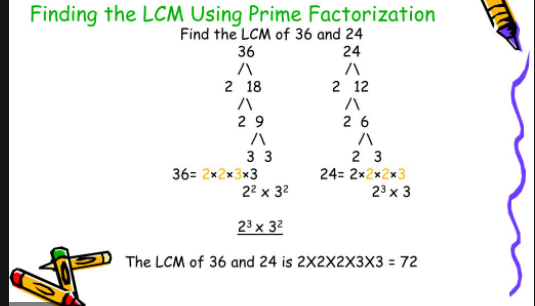 The cake method or Ladder method is the method to find the LCM of a Natural Numbers by using division. It is the easiest and fastest way to find LCM. 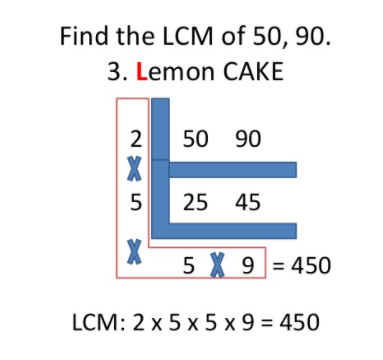 4. LCM by using the Division Methods

In this method, we have to divide the given set of natural numbers by a prime number and have to continue to do so till the remainders will be prime numbers.

LCM will be the products of all the divisors and remaining prime numbers. 5. LCM by GCF or The Greatest common factor

The formula by which we can find the LCM of a given set of natural numbers is,

Formula to find LCM of a given set of natural numbers.

The LCM or The Lowest Common Multiple of \(2\) natural numbers a and b is denoted as LCM(a,b).

The formulae to find the LCM (a,b) are,

Some examples of solved LCM problems are: Examples of LCM of fractions

Program to find the GCD of two integers:

Q.2. Find the L.C.M. of the given numbers by division method.

So far we have learnt about Multiples, Lowest common multiples of two numbers, and also introduced the topic of Greatest common divisor. LCM and GCD are important aspects of any set of numbers and tell a lot of information about their behaviour in basic addition, subtraction, division etc. LCM helps in solving a variety of problems both in Mathematics and in everything that needs Mathematics to solve its problems.

What is LCM of two numbers?

LCM of two numbers is defined as the least common multiple of those two numbers i.e. the smallest number that is divisible by both the given numbers. From the definition it is clear that

What is the GCD of two numbers?

GCD of two numbers is defined as the Greatest Common Divisior of those two numbers i.e. the biggest number that can divide both the given numbers.

What is the relationship between LCM and GCD of two numbers?

What are co-prime Numbers?

Co-Prime Numbers are those that have their \(\text{GCD=1.}\)