Odd and Even Numbers

Odd Numbers ends in 1,3,5,7,9, no matter what preceding digits they have 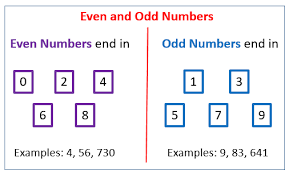 1. By comprehending the amount at “ones” place

In this approach, we analyze the quantity at “ones” place in an integer to ascertain if the quantity is even or odd. 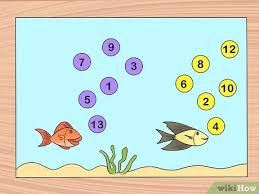 If we are able to divide digits into two groups with an equal number of elements in each, then the number is an Even Number. With the case of Odd numbers, we get a remainder of 1 while grouping.

For a number, if it forms multiple “two” groups with none remainder, it's an Even Number. Within the case of a remainder, the number is said to be an Odd number.

The given table explains the result once we apply different operations of two numbers.

If we divide digits into two groups with an equal number of elements in each, then the number could also be an Even Number. Within the case of Odd  Numbers, we get a remainder of 1 while grouping.

The property by which we classify an integer in math as even or odd is additionally mentioned as parity.

will have both even and odd. This includes 0, which is even.

The following are the parity properties of even and odd numbers: 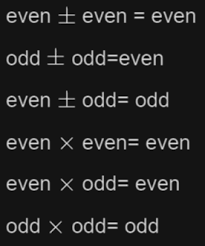 These properties are often useful for testing whether equality is false or true by using arithmetic parity rules to determine whether all sides have the same parity. 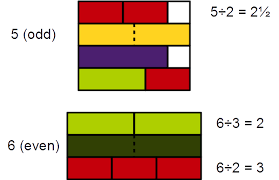 Even numbers are often divided evenly into groups of two. the Number 4 is usually divided into two groups of Numbers of 2(2+2)

Number 5 is often divided into two groups of two and one group of 1.

Are all whole numbers even?

State Four consecutive even numbers between 11 to 19.

Choose the right answer. The sum of two even numbers

How to Determine Odd and Even Numbers?

1.How do you find odd numbers?

Odd numbers are defined as any number which can't be divided by two. In other words, digits within the sort of 2k+1, where k ∈ Z (i.e., integers) are called odd numbers. It should be noted that numbers or sets of integers on a number line can either be odd or even.

1.An odd number is an integer which isn't a multiple of two
2.If these numbers are divided by 2; then there will be a remainder left
3.In the number line, 1 is the first positive odd number