What are the different Techniques you can use on Abacus?

Are you trying to learn Abacus but don't know where to begin with?

In this article, you will learn the basic techniques of the abacus and how you can use them in your classroom.

Abacus can be used as a better alternative to the calculator and it will increase your knowledge of the basic operations of mathematics.

Abacus is an instrument to calculate or count by using sliding counters and rod.

The old version of the Abacus was a shallow tray consist of sand, and numbers could be erased easily when needed, but the modern abacus is made of wood or plastic.

It is a rectangular box consist of nine vertical rods strung with beads. A horizontal crossbar that is perpendicular to the vertical rods divides them into unequal parts.

The beads above the horizontal crossbar are called Heaven beads, and the beads down the bar called earth beads.

Here are some additional points that talk about What are the different Techniques you can use on Abacus?. To view them click on the Download button.

The word Abacus derived from the Greek word ‘abax’ which means  ‘tabular form’. It was said to be invented from ancient Babylon in between 300 to 500 bc. Abacus was the first counting machine.

Earlier it was fingers, stones, or any various kinds of natural material.

It was widely in use in different countries from the Middle East to Japan, China, Russia as well as Europe.

When the Hindu number system introduced zero and also the Arbi number system came into use, the use of the abacus diminished and it became limited to counting the Place value of numbers only.

Though the Abacus originated in Babylon, it had traveled a long way from the Middle East to Japan and China.

When it traveled from one country to another it transited also. In China, it is called Suanpan. In Suanpan it has ⅖ decks.

The famous Japanese mathematician Seki Kawa replaced ⅖ decks with ¼ decks and it is called Soroban. The modern-day abacus which we use today is the Soraban type of abacus.

In general, all abacus work in a similar fashion.

In order to count on the abacus, slide all beads to the outer edge of their columns, so no beads are touching the center bar.

Use each column of the abacus to represent one digit in the number being calculated. The right-most column in a zero decimal number is the ones column, the next column to the left is the tens column, and so on.

Move one bead up from the bottom column to the median bar for the current digit to mark one, two beads to mark two, and so on up to four.

Move all four beads in the lower section down, and move a bead from the top of the same column to the median to represent five.

Move beads from the bottom up, while keeping the five at the median, to represent six through nine.

Move all beads in a row away from the median, then slide one bead in the row to its left to the median to carry over a number.

the beam and the heaven beads (beads in the upper part of the beam) and down.

Arrange the Abacus: The beads of the abacus will be in their original position; that means no beads will touch the reckoning bar and showing the number zero. 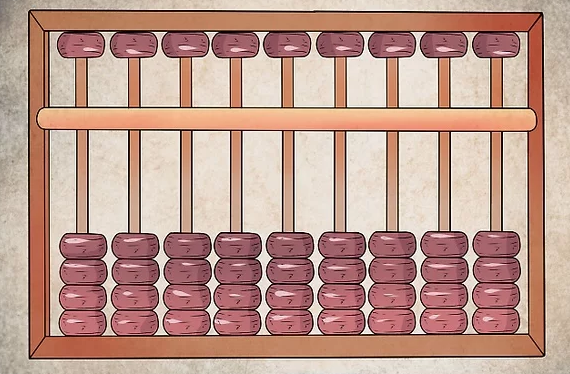 Assign each vertical rod the place name: The rightmost rod named as Ones followed by tens, hundreds, and so on.

We can assign a decimal place also. If we want to represent a decimal number such as 10.5 then the rightmost column will be the tenth place, earlier it was one’s place and followed by the place of the whole numbers such as ones and tens. 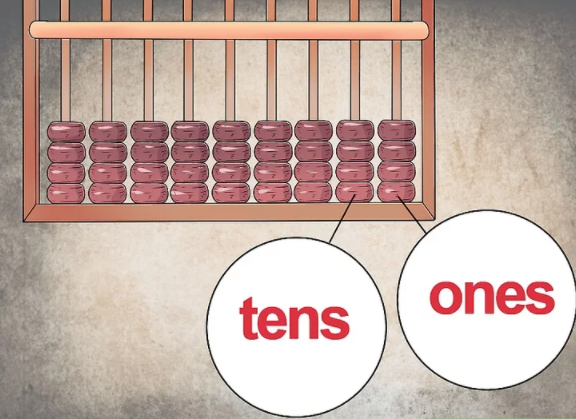 We always have to start counting from the bottom deck. Number one should be represented by moving one bead of one’s place towards the horizontal reckoning bar.

Similar way, by moving the beads towards the reckoning bar; we can make any number. 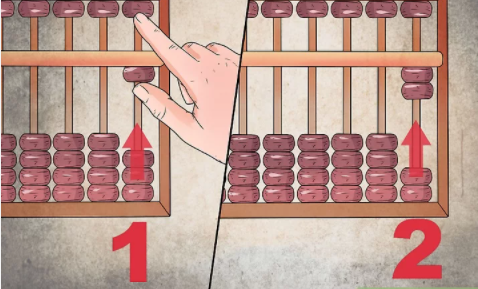 As the bottom row has only four beads to make a number more than 4, we have to move back the bottom deck’s bead to its original position and bring down the heaven bead towards the reckoning bar.

To make 6 with the heaven beads need one earth bead touching the reckoning bar.

To add a number, let’s take 1234 with another number, we need to make the number 1234 first by moving the beads according to their place.

Now we have to start adding from the left that is the highest place, in this case, it is the thousand place, and have to add 1 and 5. And gradually to the lower places.

Since the tens place has carried over(3+7=10) so have to add one bead at a hundred’s place and moving the tens’ bead to its original place making the value zero.  The same way has to add one’s place also. 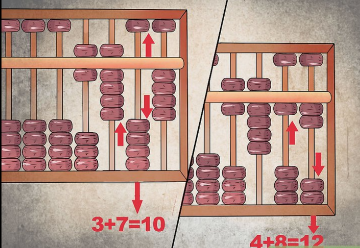 Subtraction is the reverse process of Addition. We have to make the greater number first by moving the beads in the same way. And have to borrow instead of carrying over. 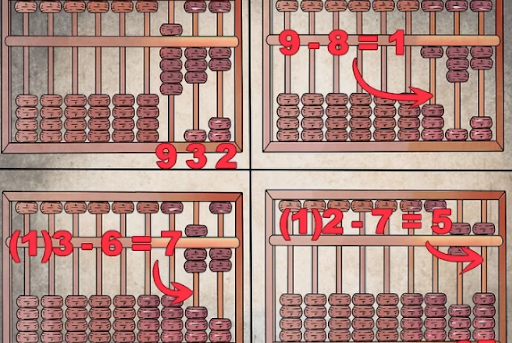 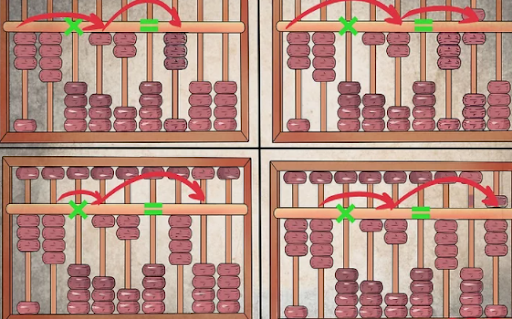 To divide, let’s take 34 by 2, we have to take 2 in the left-most column and have to keep two columns blank or as zero and then 34.

Though Abacus is now replaced by electronic calculators and computers, as a mathematical teaching tool, its role is still undeniable.

You might ask what is the need of learning the abacus when we have such advanced technology these days.

The signiﬁcance of Abacus has increased as we have come to rely on modern technology so much that we tend to rely less on our brains for arithmetic calculations or analytical reasoning.

Tools like the abacus play a very vital role in developing cognitive skills and stimulate brain development at a very early age.

Abacus is very useful and important for blind people as well, which is known as Cranmer Abacus. 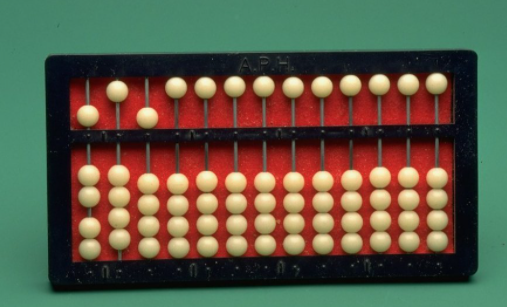