Cuemath is an active online platform for students. It is student oriented where students and teachers participate in an informative discussion.

At Cuemath, we believe that math is a life skill. The students are encouraged to learn mathematics by reasoning so that they have strong conceptual knowledge and retain their math skills for life.

In Cuemath, we create an online platform for the kids to grow and develop their mathematical skills.

It empowers students to learn math by reasoning and visual representation instead of memorizing it.

Here in Cuemath, we try to deploy student oriented teaching facilities on an online platform for mathematics.

Our learning system is designed with the aim of ensuring that students develop better and an extensive understanding of concepts of mathematics while being engaged and enthusiastic. Some of our highlights are:

The curriculum of Cuemath has been designed by graduates from IITs, IIMs, Harvard and Cambridge.

“The Cuemath curriculum focuses on making math a fun subject, which in turn makes learning fun.”

The curriculum has 3 parts: We cover all math concepts across all boards – CBSE, ICSE, State Board and international boards through math workbooks.

There are different forms of assessment, group projects, and class participation in Cuemath. 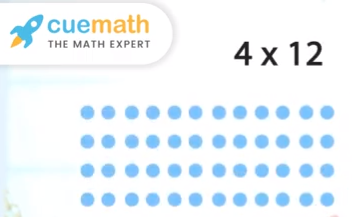 They have learnt multiplication as poem recitation and not as the algorithm of Repeated Addition.

At Cuemath, we introduce multiplication as repeated addition.

"Multiplication is one of the four basic arithmetic operations. These operations form the building blocks for the other math concepts."

It is important that before teaching multiplication, children should be familiar with the following skills:

Multiplication should be introduced using objects in the beginning.

After the idea of multiplication using objects, dot arrays can be introduced to strengthen this idea.

Multiplication tables can be built using dot arrays. Understanding this would make the retention of tables easier.

No wonder students either struggle to keep up or simply get bored. Of all subjects, this has the most detrimental effect on Math.

"Math is not just a subject. Unlike history or geography where the focus is largely on gathering knowledge, math is conceptual."

It is because their blackboard lesson hasn’t taught them what a fraction really is, A part of a Whole.

“Visualization is the best way to teach and learn fractions. ”

It builds an understanding of fractions as a concept and builds intuition.

Different manipulatives can also be used which helps in visualizing fractions as a part of a whole like using shapes, stripes and number lines.

Read more on Fractions and learn the tips and tricks on https://www.cuemath.com/maths/fractions-tips-and-tricks/

The evolution of newer technologies like data science will bring a renewed emphasis on Mathematics.

Mathematical reasoning is a critical skill which enables students to analyze a given hypothesis without any reference to a particular context or meaning. When Mathematics is not learned by reasoning, there's a heavy price to pay. On an average, children’s math ability goes down by a staggering 20+ percent points over five years.

Do children lose intelligence as they grow up? NO

Math is not our average “subject”. Math is the language of thinking and problem-solving. We only become proficient at a language only by conversing confidently, not by memorising a dictionary.

Math is not about memorising formulae. Math is more about;

"We are always doing math to solve problems, consciously or otherwise. This is why Math is not a subject, but a life skill."

We hope that you have an idea about how concepts are taught at cuemath. Visit cuemath.com to know more about our program and an evolutionary style of learning.

How do you become a Cuemath teacher?

Once registered, the teachers will need to complete a training course to understand the job responsibilities and acquire the additional skills.