Who would have thought that a deep-seated idea that led to the creation of a Turing Machine in 1936 would paint the entire canvas of centuries to come. Turing Machine did not only help in cracking the encrypted messages from enigma machines during World War 2 but also led to the foundation of modern-day computers and with it, created an entire field of study known as Computer Science.

With time, these computers have become irreplaceable tools and are paving the way for unprecedented change through Artificial Intelligence and Machine Learning. The invention of computers and the study of computer science have led to the formulation of new mental tools like Computational thinking.

In simplest possible words, computational thinking involves solving a complex problem in steps that a computer would be able to follow. Computers are brainless machines, they follow stepwise instructions that humans program them to. Therefore a programmer always tries to design computations or solve complex problems through stepwise methods known as Computational Thinking.

It involves taking a systematic approach and recursive thinking. Students learn to think in levels of abstraction and get equipped to fetch the necessary data required to solve the task. To solve a problem by thinking computationally, you would initially decompose the problem into smaller manageable tasks (Decomposition), identify the patterns or connections among these tasks (Pattern Recognition), remove unnecessary details and focus on the most important pieces and finally design stepwise solutions for the decomposed tasks  (Algorithm Thinking).

To understand it better, take an example of making a breakfast meal- the first thing you would have to know is what to prepare for the meal (vision), another very important task would be figuring out the ingredients that you will be working with (parameters/concepts), you might also like to make each dish separately (decomposition) and finally you would have to know the proportions (patterns) and the recipe (algorithm) to start the process of cooking. Now, once you have started cooking, mishaps might happen in between but you can always balance out the proportions by adding some extra milk, tea or butter (debugging). 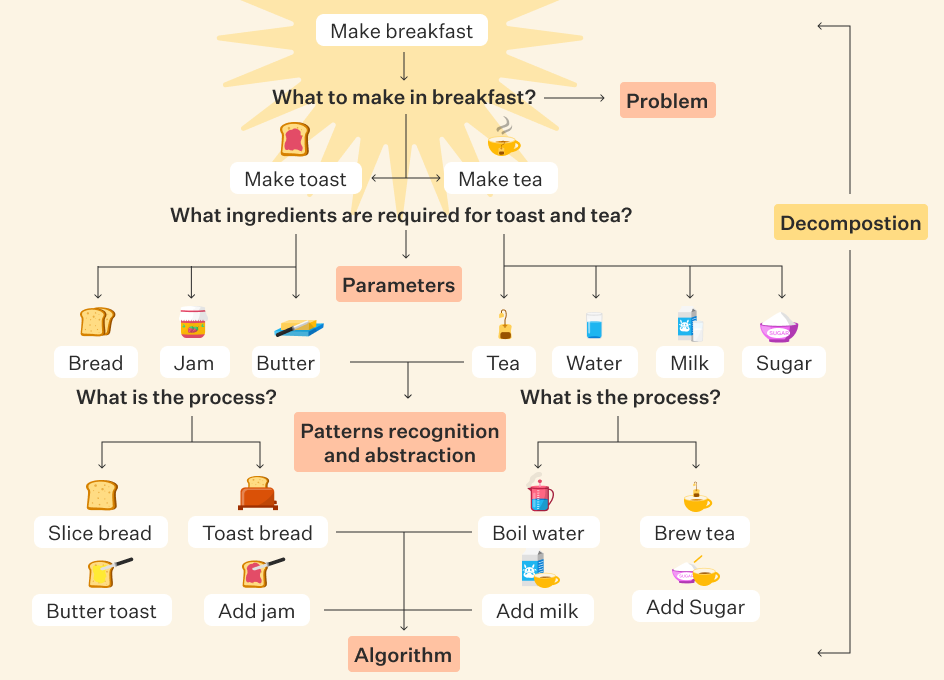 Writing a program or a piece of code is a lot like that. It is not a straightforward process but requires computational thinking at every level. While writing a program students first define a problem or plan, secondly they figure out the parameters, better known as ‘Computational Concepts’ such as sequence, loops, events, operators, etc. Further, they design the program, element by element by identifying the patterns across them. This process also involves abstracting the necessary data and then finally writing stepwise instructions to design the program as a code.

For example, while writing a program for drawing a ‘line of squares’ on a screen, students first understand the properties of a square (equal sides, 90 degrees angles), then they employ programming parameters such as loops to draw the four sides by repeating the action 4 times on 90-degree angles. To finally create a series of similar squares, one can recognize the repetitive pattern and use another loop (nested loops) to create the program ‘line of squares’. The final steps would include writing down a stepwise algorithm of the program and testing the same for possible bugs (errors).  This practice of systematic thinking gets reinforced as one creates more and more programs.

Hence, designing a code requires one to be good at debugging along with being incremental and iterative. All these computational practices involved during coding help reinforce a habit of systematic problem solving and thinking. Perhaps this is one of the main reasons why Steve Jobs once said, "Everybody in this world (country) should know how to program a computer because it teaches you how to think." At the same time, it has also been observed that kids who code experience a shift in their perspectives. Programming enhances a holistic attitude amongst individuals and instills a practice of expressing, connecting and questioning known as computational perspectives

Yet, “the task of learning to program is often recognized as a frustrating and demanding activity by students”. Therefore to make the process easier Game-based Learning (GBL) and the use of storytelling visual programming tools have been proposed as a pedagogical method to teach coding.

Since kids enjoy playing digital games, therefore at Cuemath, we employ Game-Based Learning along with visual programming tools such as Code.org and Scratch to teach coding. The vision is to empower the child to create the games they would like to play independently. From coding, students learn to translate their imagination into reality by applying computational thinking. It teaches them to plan well-articulated and efficient processes and makes them great coders and next-generation problem solvers.

Although there are a plethora of advantages of teaching coding to kids, if not taught properly, it can become pretty daunting and boring. Hence, choosing the right course with the best possible curriculum and teachers is the only way forward. We at Cuemath believe in making learning a FUN experience, thus the curriculum has been specifically curated to include various interactive games such as platform games, racing games, video sensing games, etc to make the student journey smooth and fruitful. So, the next time your kid wants to play a game- we will help them to design it on their own.

Finally, for an even enriching learning experience, you can enrol your child into an effective online coding course. Cuemath provides Live online 1:1 Coding classes and Math Classes for kids from KG to 12th grade. Cuemath’s coding curriculum is class-leading providing a unique blend between the basics of programming and real-life projects using current computer technologies helping students achieve mastery. Book a free demo and get in touch with our academic counsellor to get the best course for your child.

Priyanshi is a Liberal Arts graduate from Ashoka University who has been working in Education sector ever since the beginning of her professional career. In her opinion, every child is unique and can become the next Arybhatta, Picasso or Marie Curie if given the right guidance and education. Priyanshi calls herself a lifelong learner and tries to enrich her knowledge through books, people, cinema and experiences. For now, she keeps herself busy by making thought-provoking content for young children, however, if not working you can find her watching FRIENDS episodes on repeat.