The Scientific Revolution of the Seventeenth Century identifies with the change in thought and beliefs. Johannes Kepler is one of the prominent figures responsible and a few others like N. Copernicus, F. Bacon, Galileo Galilei, and Isaac Newton. The article below would throw some light on the life and work of Johannes Kepler, the great German mathematician, astronomer, and astrologer, an inspiration for numerous young scientists.

Johannes Kepler was born on December 27, 1571, in Wurttemberg, Germany. He came from a modest family living in Weil der Stadt, a small town in Germany.

He could study at the University Of Tubingen in 1589 due to the Ducal Scholarship. He had planned to become a theologian, but destiny had other plans for him. As he sometimes remarked himself, Divine Providence guided him to the study of stars.

Michael Maestlin, the Mathematics professor at the University of Tubingen, lent Kepler his own heavily annotated copy of Copernicus’ 1543 book. Early in the 1590s, Kepler made it his mission to demonstrate what Copernicus had guessed while being a student.

Kepler strongly believed that the image of the Christian Trinity was the reflection of the Divine Mystery- God, the father, Christ, the Son, and the Holy Spirit, the intervening space. For him, the divine archetypes were made visible as geometric forms that configured the spatial arrangement of tangible, corporeal entities. Kepler’s God was a dynamic entity whose presence was symbolized by the Sun’s body. The natural world, for him, was a mirror that reflected the divine ideas. He was also inspired by the Platonic notions of innate ideas in the soul. He also believed that the human mind was created by the Divine to understand the world’s structure. Mysterium Cosmographicum, 1593, the first work of Johannes Kepler, had a glimpse of the ideas that he would pursue throughout his life. Though he is more remembered in history for his remarkable laws of planetary motion.

The first two laws of planetary motion got published in AN in 1609, although he arrived at these results much earlier. The first law of Planetary motion establishes that the orbit of a planet’s orbit is an ellipse with the Sun in one focus. 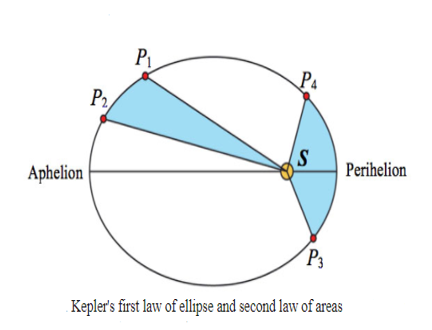 The Harmonic law or Keplar’s third law was published in Harmonice Mundi in 1619. 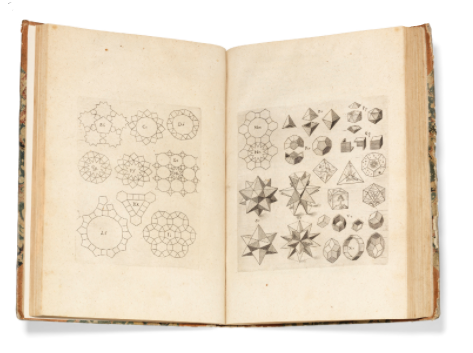 Later, in his Epitome, he provided a more systematic approach to all the three laws, their grounds, and their implications.

Moreover, he calculated the most exact astronomical tables, whose continued accuracy did much to establish the truth of Heliocentric Astronomy (Rudolphine Tables, Ulm, 1627).

Apart from the field of astronomy. Kepler also contributed to Optics and metaphysics of light with two seminal works, the Ad Vitellionem paralipomena and the Dioptrice. Apart from his ideas of Harmony and Soul, Kepler was trained in Mathematics from his earlier days at the University of Tubingen. Kepler produced original contributions to the theory of logarithms and his favorite field of Geometry (especially with his stereometrical investigations).

He discovered two new regular polyhedrons in 1619. He also gave the first mathematical treatment of close packing of equal spheres in 1611 which led to an explanation of the shape of the cells of a honeycomb. In 1624, he gave the first proof of how logarithms worked.

He also devised a method of finding the volumes of solids. In 1615, he used the occasion of a practical problem to produce a theoretical treatise on the volumes of the wine barrels. Stereometria Doliorum Vinariorum was his book published on the Stereometry of Wine Barrels in Linz. His work in 1615 and 1616 also contributed to the development of Calculus.

The last decade of Kepler’s life was filled with anguish as his mother was charged with witchcraft and he had to run from pillar to post to save her life and honor and this disrupted his work.

Towards his later days, Kepler found a new patron in Wallenstein. He supported the construction of a printing press from him and in return, expected horoscopes from him. Kepler accurately predicted ‘horrible disorders’ for him just close to his murder in 1634.

In 1630, Kepler, soon after arriving at Regensburg, fell seriously ill with fever and died on November 15, 1630. This is a retired telescope launched to discover Earth-size planets orbiting other stars. NASA launched it in March 2009 as an exoplanet hunter and has named it after the legendary astronomer Johannes Kepler. Kepler 22B is an extrasolar planet orbiting within the habitable zone of the Sun-like star Kepler-22. It is located at a distance of about 638 light-years from Earth in the constellation of Cygnus.

The Great German mathematician, Astronomer, and Astrologer, one of the epitomes of the Great Scientific Revolution of the Seventeenth Century, who lived from 1571-1630, was laid in peace in Regensburg. His grave was swept away in the Thirty Years, but the epitaph that he composed for himself survived:

‘I used to measure the heavens,

Now shall I measure the shadows of the Earth?

Although my soul was from heaven,

The shadow of my body lies here.

Which Austrian City did Kepler teach in?

What is Kepler famous for?

Kepler is famous for his extraordinary work in the fields of mathematics, astronomy, astrology, optics, metaphysics, and geometry.

What did Kepler discover?

How does Kepler’s work affect us today?

Kepler’s laws and terms are used even today, and we have a better understanding of the mysteries of astronomy, astrology, planetary movements, logarithms, etc.

What is the Kepler space telescope?

What country did Kepler live in?