John Napier | The originator of Logarithms

Today, if you want to perform any mathematical calculation, you probably just use a calculator, right? Calculators are easy to use and widely available, and they make it simple to perform even the most complex calculations.

However, back in the sixteenth century, there were no calculators! Every calculation had to be done by hand, and this could be pretty difficult and tedious. The inability to perform accurate calculations seriously limited scientific research in many fields.

However, things were about to improve. In 1550, a man named John Napier was born in Scotland. By the end of the century, he had revolutionized mathematics and science by making it much easier to perform certain types of very difficult calculations. What was this remarkable new tool he invented? He called it the Logarithm.

The Scottish mathematician John Napier was born to Sir Archibald Napier; the seventh Laird of Merchiston and Janet Bothwell in the Merchiston Castle, Edinburgh on August 1, 1550.

John Napier was a mathematician and theological writer who  also invented the "Napier's bones" and made decimal points of common use in arithmetic and mathematics.

Here we more talk about the originator of Logarithms (John Napier). To view them click on the Download button.

Following the tradition of studies for the noble families then, Napier did not receive any formal education but got tuitions at home. Despite this arrangement, he was very intelligent.

At just the age of 13, he started attending the St Salvator’s College at the University of St Andrews but left in between without further pursuing a degree.  He later received higher education from Europe and returned to his homeland in 1571. 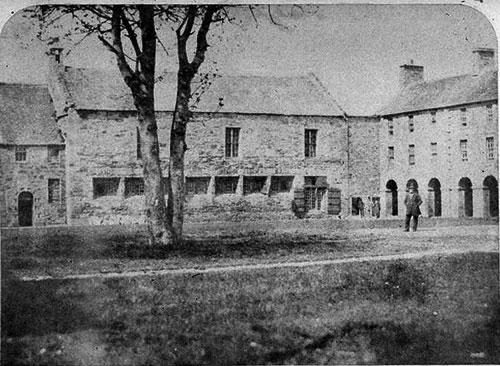 Napier got married in 1572 to Elizabeth with whom he had two children. He had ten more children from his second wife Agnes Chisholm, whom he had married after Elizabeth’s death in 1579.

During his studies, Napier had developed great interest in Theology and remained an active participant of religious activities.

His first publication was also a religious work titled as Plaine Discovery of the Whole Revelation of Saint John and was written against the Spanish Blanks; a conspiracy to extinguish Catholics from Scotland in 1594.

He also supported them by designing new weapons for their defense.

John had a great interest in the Book of Revelation. He was also influenced by sermons of Christopher Goodman and therefore, he developed a very strong anti-papal reading.

He used the Book of Revelation for a timeline of sorts in order to predict the Apocalypse. He also applied Sibylline Oracles to calculate the date the world would end. He believed that this would occur either between 1688 or 1700. He even dated the seventh trumpet to 1541.

In 1594, John dedicated a book called Plaine Discovery to James VI. He tried to convince the king to see that justice was served against all the enemies of God’s church.

He advised the king to reform the universal enormities of the country beginning with his house, family, and court. The book was a great success both at home and abroad.

In January 1594, Napier addressed the King a letter that forms the dedication of his Plaine Discovery of the Whole Revelation of Saint John, a work that, while it professed to be of a strictly literary character, was calculated to influence contemporary events. In it, he declared:

“Let it be your Majesty’s continuall study to reforme the universall enormities of your country, and first to begin at your Majesty’s owne house, familie and court, and purge the same of all suspicion of Papists and Atheists and Newtrals, whereof this Revelation forthtelleth that the number shall greatly increase in these latter daies.”

The work occupies a prominent place in Scottish ecclesiastical history.

Following this work’s publication, Napier seems to have occupied himself with the invention of secret instruments of war, for in a manuscript collection now at Lambeth Palace, London.

There is a document bearing his signature, enumerating various inventions “designed by the Grace of God, and the worke of expert craftsmen” to defend his country.

These inventions included two kinds of burning mirrors, a piece of artillery, and a metal chariot from which shot could be discharged through small holes.

Napier devoted most of his leisure to studying mathematics, particularly to devising methods of facilitating computation, and it is with the greatest of these, logarithms, that his name is associated.

He began working on logarithms probably as early as 1594, gradually elaborating his computational system whereby roots, products, and quotients could be quickly determined from tables showing powers of a fixed number used as a base. 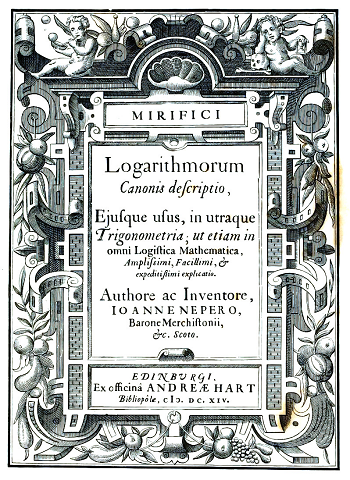 Logarithms are meant to simplify calculations, especially multiplication, such as those needed in astronomy.

Napier discovered that the basis for this computation was a relationship between an arithmetical progression—a sequence of numbers in which each number is obtained, following a geometric progression, from the one immediately preceding it by multiplying by a constant factor, which may be greater than unity (e.g., the sequence 2, 4, 8, 16 . . . ) or less than unity (e.g., 8, 4, 2, 1, 1/2 . . . ).

In 1615, Henry Briggs, a prominent English mathematician, visited John. Some of the issues they discussed were re-scaling Napier’s logarithms where the presence of mathematical constant e was a practical difficulty.

Although Napier’s invention of logarithms overshadows all his other mathematical work, he made other mathematical contributions. In 1617 he published his Rabdologiae, seu Numerationis per Virgulas Libri Duo (Study of Divining Rods, or Two Books of Numbering by Means of Rods, 1667).

In the book, he described ingenious methods of multiplying and dividing of small rods known as Napier’s bones, a device that was the forerunner of the slide rule. He also made significant contributions to spherical trigonometry, particularly by reducing the number of equations used to express trigonometrical relationships from 10 to 2 general statements.

He is also credited with certain trigonometrical relations—Napier’s analogies—but it seems likely that the English mathematician Henry Briggs had a share in these. 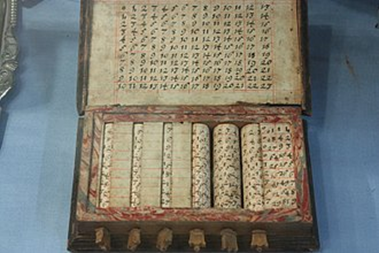 Another of Napier’s very famous inventions includes Napier’s bones that provided a mechanical method for multiplication and division. Ivory rods having bone like structure were used in this device which formulated the name Napier’s bones.

He explained his device in his book Rabdologiae; seu Numerationes per Virgulas libri duo (based on two volumes) in 1617. This working of this incredible invention resulted in future developments such as analog computers and slide rule.

Along with Henry Briggs, Napier also worked on trigonometric relations which were presented as Napier’s analogies. Napier’s Rules of Circular Parts is another of his works in trigonometry that proved theorems on spherical trigonometry.

As an extension to his logarithm tables, Napier also worked on computation of logarithm. His work could not get published during his lifetime, but it later got published after his death in 1920 as Mirifici logarithmorum canonis construction. 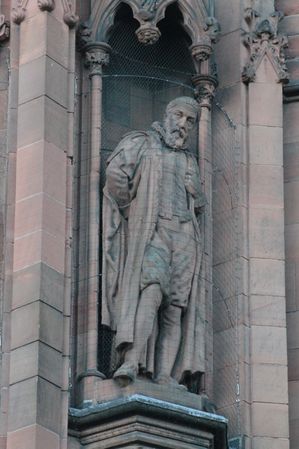 In 1617 only, chronic gout resulted in the death of John Napier. He passed away on April 4, 1617 in his birth place; the Edinburgh city of Scotland where he was spending the last few years of his life and was buried in St. Cuthbert’s Church.

For learning about the math behind Bones, please visit Link.

Also, check our other blogs on famous Mathematicians:

The instrument makers – John Speidell and Edmund Gutter – were some of Napier’s closest followers. His contributions in logarithms are given credit as the largest single factor in the adoption of decimal arithmetic.

Today an alternative unit to the decibel is used in electrical engineering, the neper. This is named after Napier. Not only that, the crater Neper on the Moon is also named after him.

Check out the Cuemath fee structure for all grades and book a trial class today!

When did John Napier develop Logarithms?

John Napier, the Scottish mathematician, published his discovery of logarithms in 1614.

What is John Napier famous for?

John Napier is best known as the discoverer of logarithms. He also invented the "Napier's bones" and made the decimal point a common use in arithmetic and mathematics.

What is Napier’s Bones machine used for?

Napier's bones is a manually-operated calculating device created by John Napier of Merchiston, Scotland, to calculate products and quotients of numbers.