Imagine a man in a medieval town in Kerala.

Imagine him lying on a stone, awake, watching the sky at night.

Imagine him in his temple, lying on two stones in the courtyard of the temple, watching and studying stellar astronomy.

Imagine him, teaching students about his observations in gurukuls along the banks of Dakshina Ganga or Bharatapuzha as it is known today.

This was Madhava of (Iringatappally Mana in Kallettunkara). Since his Mana or home was in the confluence of two villages, it also came to be called as Sangamagrama.

Madhava of Sangamagrama is called the greatest mathematician-astronomer of medieval India. He founded the Kerala School of Astronomy and Mathematics in the late 14th Century.

Who is Madhava of Sangamagrama?

Almost all of Madhava’s original work is lost, he is referred to in the work of later Kerala mathematicians as the source for several infinite series Madhava of Sangamagrama was comfortable with the concept of infinity, in particular the infinite series especially in geometry and trigonometry.

There were several astronomers before Madhava. Like Kǖţalur Kizhār (2nd century), Vararuci (4th century), and Sankaranarayana (866 AD). There could have been many others too, but there are clearer records after Madhava.

To understand how the works of Madhava of Sangamagrama, reached us, let us look at this chart: 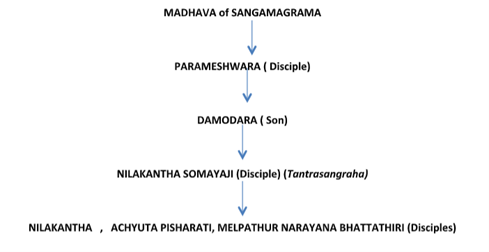 In Nilakantha Somayaji's Tantrasangraha, there is a mention of Madhava of Sangamagrama as the source for several infinite series expansions, including sinθ and arctanθ. A 16th-century text Mahajyānayana prakāra (Method of Computing Great Sines) cites Madhava as the source for several series derivations for π. In Jyeṣṭhadeva's Yuktibhāṣā, written in Malayalam, these series are presented with proofs in terms of the Taylor series expansions for polynomials like 1/(1+x2), with x = tanθ, etc.

Karanapaddhati,Sadratnamala, Tantrasangraha and Yuktibhāṣā, were mentioned in an article by Charles Matthew in 1834 to draw attention to their priority over Newton’s discovery of differentials. In the mid-20th century, the Russian scholar Jushkevich revisited the legacy of Madhava of Sangamagrama based on the information provided by Prof Sarma in 1972.

Works of Madhava of Sangamagrama

Contributions of Madhava of Sangamagrama

The concept of any number going to the point of infinity with a series of expansion was discovered by Madhava. What is astounding is his estimate of an error term (or correction term). This means that Madhava not just understood the infinite series but also its limited nature. Hence we can assume that Madhava of Sangamagrama may have invented the ideas underlying infinite series expansions of functions, power series, trigonometric series, and rational approximations of infinite series.

However, these are conclusions drawn based on the work of Madhava’s disciples. Let us look at some of the discoveries attributed to Madhava based on the study of many scholars.

Among his many contributions, he discovered the infinite series for the trigonometric functions of sine, cosine, tangent and arctangent, and many methods for calculating the circumference of a circle. One of Madhava's series is known from the text Yuktibhāṣā, which contains the derivation and proof of the power series for the inverse tangent, discovered by Madhava. In the text, Jyeṣṭhadeva describes the series in the following manner:

This series is Gregory's series (named after James Gregory, who rediscovered it three centuries after Madhava). Even if we consider this particular series as the work of Jyeṣṭhadeva, it will pre-date Gregory by a century, and certainly, other infinite series of a similar nature had been worked out by Madhava. Today, it is referred to as the Madhava-Gregory-Leibniz series.

Madhava composed an accurate table of sines. Marking a quarter circle at twenty-four equal intervals, he gave the lengths of the half-chord (sines) corresponding to each of them. It is believed that he may have computed these values based on the series expansions

Madhava of Sangamagrama is credited with the knowledge of the value of the mathematical constant Pi to an accurate value of π =3.14159265358979324 (correct to 17 decimal places).This is cited in the text Sadratnamala, usually considered as prior to Madhava, but according to the research of R. Gupta, this was composed by Madhava.

Besides investigations into other series for arc lengths and the associated approximations to rational fractions of π, Madhava of Sangamagrama is credited with the following:

Kerala school of astronomy were aware of calculus and were being used by Mathematicians before Madhava of Sangamagrama. There is a possibility that these ideas were transmitted to the west from Kerala.

The Kerala school of astronomy and mathematics flourished for at least two centuries beyond Madhava. In Jyeṣṭhadeva, we find the notion of integration, termed sankalitam, (lit. collection), as in the statement:

Translation: integration of a variable (pada) equals half that variable squared (varga); i.e. the \(\int^{x}_{dx}=\frac{x^2}{2}\) . This is clearly a start to the process of integral calculus. A related result states that the area under a curve is it’s integral. Most of these results pre-date similar results in Europe for several centuries. In many senses, Jyeshthadeva's Yuktibhāṣā may be considered the world's first calculus text.

The group also did much other work in astronomy; indeed, many more pages are developed to astronomical computations than are for discussing analysis related results.

Based on references, Prof K.V. Sarma has identified Madhava as the author of the following works:

Madhava of Sangamagrama can be considered as the founder of mathematical analysis. His discoveries indicate that he had extraordinary intuition. In astronomy, he discovered a procedure to determine the positions of the Moon every 36 minutes, and methods to estimate the motions of the planets. The Kerala School of Astronomy and Mathematics were the first to come in contact with European navigators in the Malabar Coast. The port of Muziris, near Sangamagrama, was an important centre for maritime trade and a number of Jesuit missionaries and traders were active in this region. It is quite possible that the Jesuit groups interacted with the Kerala School of Astronomy and Mathematics and transmitted this knowledge to Europe, which was still about a century before Newton.

The Kerala School of Astronomy and Mathematics contributed much to linguistics (the relation between language and mathematics is an ancient Indian tradition, see Katyayana). The Ayurvedic and poetic traditions of Kerala can also be traced back to this school. The famous poem, Narayaneeyam, was composed by Narayana Bhattathiri.

When was Madhava of Sangamagrama born?

When did the Madhava of Sangamagrama die?