Why you need to learn about Percentage to Decimals?

On a daily basis, we encounter a lot of ideas related to fractions, decimals, ratios, and percentages. Percentages are used widely. They are used as a tool for comparison, used to estimate interest rates in banks, to find profit or loss in business transactions, statistics, and a lot more.

We use decimals every day while dealing with length, weight, money, etc. Decimal numbers are essential when we require precision. Measurement of quantities is done using decimals.

The understanding of these ideas, Percentages, and Decimals are not only essential to being numerate but they are also foundational to topics such as similarity, trigonometry, coordinate geometry, and algebra. So let us see how to use the ideas of Percentages and Decimals and the relationship between them.

Decimals to Fractions to Percentages - The Relationship Between Them

The word ‘percent means ‘out of 100‘. The numerator of a fraction with a denominator of 100 is called percentage.

We can model percentages using a square that has been into 100 small squares. Take the grid below as an example.

In the grid above, what percent of boxes are shaded?

The percentage is also a way of comparing two quantities.

In which test did she fare better?

\(\frac{30}{40}\) in Maths and \(\frac{27}{30}\) in Science, it is not right to say that she did well in Maths just by seeing the numerators. The maximum marks of both the tests are different. We need to convert the marks in the two tests into percentage and then compare.

So, she fared better in Science.

A percentage is a symbol. A symbol representing a fraction with a denominator of 100. So, in written language, it is more convenient to write ‘%’ rather than the fraction:

The symbol (%) is read as ”percent” and indicates the number of parts of a unit, or a reference amount, divided. Therefore, the percentage (%) always appears in an expression that relates two quantities.

Fractions with a denominator of 100 are written merely as percentages.

To write a fraction as a percentage, check if it is possible to find an equivalent fraction with a denominator of 100.

Let us see how attendance percentages are calculated for students attending online classes at the school. There are 36 fruits in a basket. 9 are mangoes and the remaining are apples. What percentage of fruits are mangoes?

Percentages can be used to compare fractions. In every pair of fractions, write out the greater fraction after converting both fractions to percentages.

In math, Percentages are always preferred mostly because they can be converted into fractions and decimals and used in equations.

Step 1: Convert sixteen percent into a decimal by moving the decimal point over two places, making 18% into .18

Since the strip's been divided into five equal parts, the value of every other part is 50.

Now let us see another way of comparing quantities. We are going to compare the expenditure of two families.

Convert the fractions to percentages.

How do we calculate the change in a quantity as a percentage? It may be necessary to find the difference between the two numbers and identify the increase or decrease percentage. Just like determining percentages, this is a simple process.

Another example is that, the price of one litre of oil increases from ₹84 to ₹96. Find the percentage increase in the price of the oil.

And if we add the percentages we get 100%. For instance, in a hostel if 30% of the people are students, 65% are working ladies and 5% are the workers, if we add all the parts of the whole we get 100. So if we are given one part we can always find the other part.

See this example, there is a basket full of mangoes and oranges. If 65% are mangoes, then the percentage of oranges is

The word decimal comes from the Latin word decem, meaning ‘ten’. The decimal notation uses tenths, hundredths, thousandths, and so on, as well as ones, tens, hundreds, thousands, and so on as shown in the figure below:

Tenths: Place value of the place immediately after the decimal point (i.e.tenth place) is \(\frac{1}{10}\)

Hundredths: The place value of the place directly next to the tenth place is known as the hundredth place \(\frac{1}{100}\)

We can represent decimal numbers using Base-10 blocks (flats, rods, and blocks). A flat represents one whole unit, a rod one-tenth of the whole and a block one-hundredth of the whole.

Another way of representing decimal numbers is on the abacus. Multiplication: If multiples of 10 like 10, 100, or 1000 and so on are multiplied by a decimal number, we can obtain the answer by shifting the decimal point to the right the same number of times as the number of zeros. If there are no places left to shift the decimal point, we add zeros after the number.

Division: While dividing a number by 10, 100, or 1000, the digits of the number and the quotient are the same, but the decimal point in the quotient shifts to the left by as many places as there are zeroes over 1.

As a general rule, two decimal numbers are the same only if the fractions they represent are equivalent. This is because adding a zero to the right of a decimal number is the same as multiplying its fractional representation by 10 / 10.

And this is why we say that "adding zeros to the right of a decimal number does not change its value.

Let us see how to carry out the Percentage to Decimal conversion.

To write a percentage as a decimal we divide by 100.

For decimal to percentage conversion, simply multiply by 100. For example, 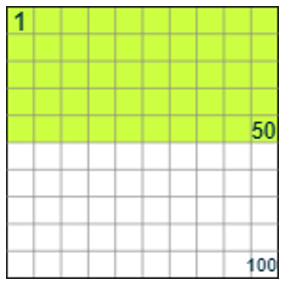 These all mean the same thing:

Convert each of the following percentages to decimals

Convert each of the following decimals to percentages

Not all percentages can be expressed as fractions and figures such as 3.26% may need to be used as shown in the given example.

The following table shows the relation between Fractions, Percentage,s and Decimals.

From the above table we can understand that the relationship between decimals and percents is that they are merely different numerical expressions of the same value.

Real-life Usage of Percentage and Decimals

Percentages play a vital role in the evaluation of marks, understanding the growth of the market value for any product with respect to a given scenario, in banks for calculating interests based on different kinds of deposits.

Decimals are used widely. In our daily life, we use decimals while dealing with money, weight, and length.

Online store checking provides lots of opportunities for children to explore percentages and decimals. We could ask questions such as

This concept has a profound impact on everyday life in numerous professions and is extremely important. This article covered all the basic concepts with examples.

What is the history of Percentages?

The history of Percentages dates back to the Roman period. Roman taxes were calculated on the basis of percentages. For example, Augustus levied a tax of 1% on goods sold at auction and there was a tax of 4% on every slave sold. The Romans did not use this notation but certainly employed the concept that we use today.

In the USA, a gallon is equivalent to 128 fluid ounces or 3.785 liters. But in the UK, it's 160 fluid ounces or 4.546 liters. That's quite a difference, with the British contenders having to potentially guzzle down 20% more milk than their American counterparts.

What is the history of Decimals?

Decimal fractions had been employed for the extraction of square roots by Islamic mathematicians such as Al-Kashi (1380 – 1429) and also by the Chinese at an even earlier time. The introduction of decimal fractions as a common computational practice can be dated back to the Flemish pamphlet De Thiede published at Leyden in 1585, together with a French translation, La Disme, by the Flemish mathematician Simon Stevin (1548-1620). Will need a new similar image.

To know more please click on the link below :

How to Convert Percentages to Decimals