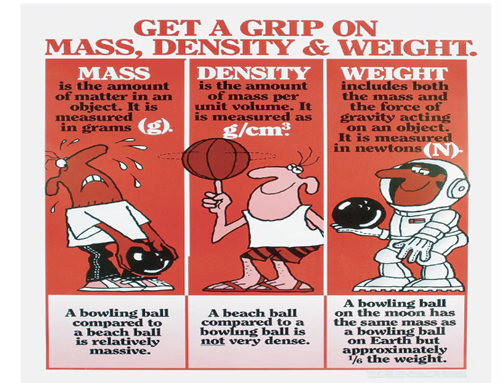 Weight, Mass, and Density is quite an intriguing topic. They all sound the same, isn’t it? Here is the surprising element: though Weight, mass, and density depend on one another they are different from each other. To make a clear understanding, the above image is explained below.

Learn about the Conversion of Units of Weight, Mass, and Density. g to kg, kg to lbs, lbs to kg, etc. with examples. Here is a downloadable PDF to explore more.

To summarise the facts learnt;

Mass is the number of atoms packed in an object; it remains the same irrespective of the force acting on it.

SI unit of mass is Kilogram.

Weight is the force acted on mass pulling towards the ground; it depends on the gravitational force on which the object is placed .

The SI unit of weight is newton.

Density is the amount of mass that packed inside the volume of any object. Density depends on the volume and the mass;

Density is the amount of matter inside an object of any volume, regardless of the volume; density can be inversely proportional to an object’s volume.

What is the difference between weight and mass?

What is the density of gold?

Gold is one of the densest metal on earth; it weighs 19.32 grams per cubic centimeter

How many kg in a lb?

How many pounds is 23kg?

How many kgs in a ton?