Geometry is one of the oldest branches in the field of Mathematics. The word ‘Geometry’ is borrowed from Greek, which literally means “Earth Measurement’. Geometry is the study of shapes, sizes, positions, and spatial relationships among different objects.

Coordinate or Analytic geometry is a system where an ordered pair of numbers are used to describe the positions of points on a plane, thus helping us to locate points in space.

The (pair of) numbers used to locate a point in a plane are called Coordinates.

The \(2\)- dimensional plane where the coordinates are plotted, in order to define the position of an object is called the Cartesian Plane or Coordinate Plane.

A Cartesian plane has two scales x and y.

Let us see how a typical Cartesian plane looks like. 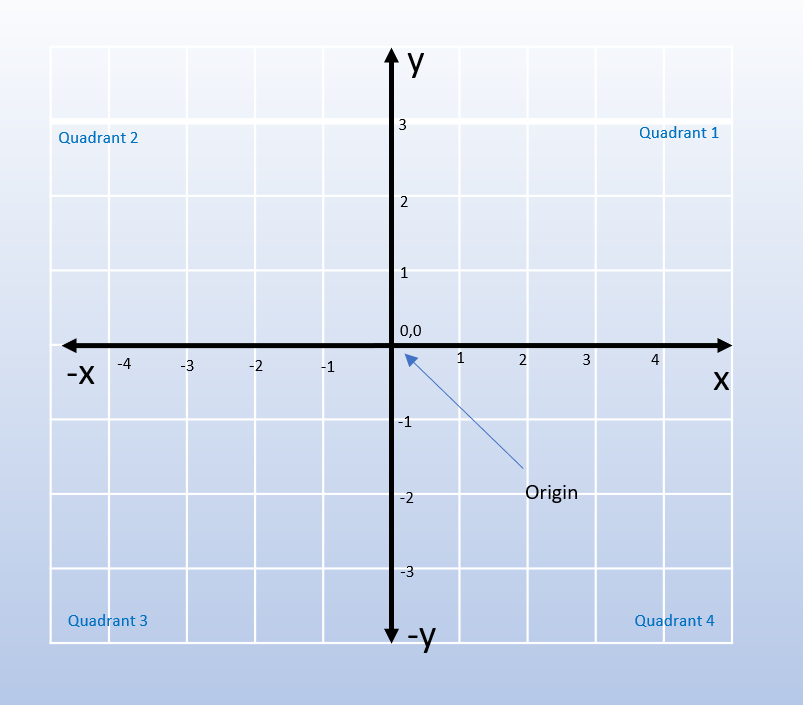 Similarly, in the y-axis all values above the origin point are positive and all the values below the point are negative.

The x and the y axes divide the plane into four quadrants.

The quadrants are numbered in an anti-clockwise direction.

Let us see an example of point A in the plane, as shown below. To find the coordinate for the point A in the plane, we need to check the corresponding points on the x-axis and the y-axis, which corresponds to \(3\) and \(2.\)

Equation of a line

What is a line?

A line is a straight one-dimensional figure made by two or more sets of points. It extends on both the sides.

A line can be represented by two or more points on a Cartesian plane. Let us see an example below. In the figure shown above, we have drawn a line passing through two points A and B.

Only one line can pass through these points. Thus, a line can be uniquely defined by \(2\) points on a plane.

A point and a Slope

A line can also be represented by only one point and a slope.

A slope gives information about the direction/ steepness of the line. It is usually denoted by the letter m. It is also called the gradient of a line. Since the slope gives information about the direction of a line, it is sufficient to know only one other coordinate point (instead of \(2\) coordinate points) to construct a line in a plane.

When y increases with an increase in x, the line rises upwards. Hence it is called a positive slope and the value of m will be a postive number. When y decreases with an increase in x, the line slopes downwards. Hence it is called a negative slope and the value of m will be a negative number. When there is no change in the value of y with an increase in x, then it is called a zero slope. The slope m of this horizontal line is zero. The y intercept is a coordinate point (x,y) where x \(= 0.\) In other words, it is the point where a line touches the y axis.

The x intercept is a coordinate point (x,y) where y \(= 0.\) In other words, it is the point where a line touches the x axis. 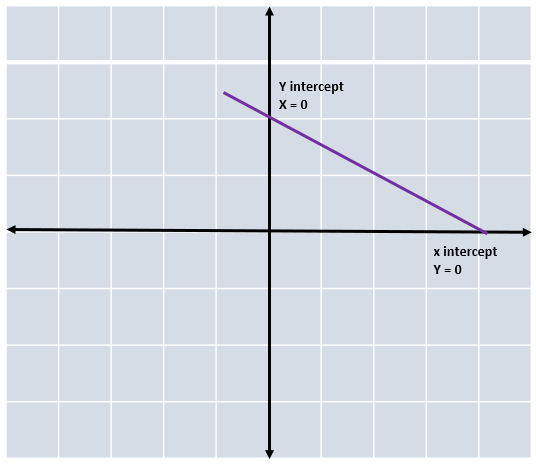 The equation of a straight line in the slope – intercept form is given by the following formula.

m = slope of the line

x, y = any other point on the line

Equation of a straight line (general form of a line)

A,B, and C are constants

x, y = any other point on the line

LOCATE THE FOLLOWING POINTS ON A GRAPH Plot the following points on a graph sheet.

Are you able to find the x and y intercepts out of these points?

Can you find out which of these points make a square shape when joined with the x and y axes? As seen in this article already, slope is calculated using the following formula

Changes in the value of x and y are calculated between the two points A and B.

Find the slopes for the following coordinates. Also find if they are positive, negative or zero slopes.

From the equation of a line (slope – intercept form),

we can form the following equation

We can find multiple coordinate points for this line by substituting various values for x.

Let us find one such point now.

Can you try to find more coordinate points for this line and plot them on a graph?

The Coordinate system helps in representing geometrical shapes in terms of numbers. It allows the study of algebraic equations on graphs. Coordinate Geometry has multitude of applications in the real-world including Aviation, Space science and Engineering.

We have covered the basic concepts of Coordinate geometry in this article.

What is the slope of a line?

The slope of a line gives information regarding the direction of the line in terms of how steep the line is. Please refer Slope  for more information.

Abscissa is the x coordinate of a point in the plane. To put it simply, this is the distance of a point horizontlly from the y – axis.

What is an Ordinate?

Ordinate is the y coordinate of a point in the plane. This is the distance of a point vertically from the x – axis.

What is the plural of axis?

The plural of axis is axes.

What is a Cartesian plane?

The 2- dimensional plane where the coordinates are plotted, in order to define the position of an object is called the Cartesian Plane or Coordinate Plane.

Where do we use Coordinate geometry in real-life?