Do you know, there is a family of functions which returns only integers based on a certain rule, corresponding to a real number. Greatest integer function (also called floor function) and least integer function (also called ceiling function) form a part of specific types of functions which result in only an integer. In this blog, we will study about Greatest Integer Functions.

What is a function? A function is a kind of machine which takes an input and produces an output.

So f(x) = 2x + 3 is a function which is taking different values of x called input and results in various values of f(x) called output.

Even the formulas that we apply can be treated as functions because they depend on one or more variables for instance volume of water in glass depends on the radius of the container and the height to which it is filled. You keep on changing the values of radius and height and you get different values of the volume. There are various types of functions depending on the power or form of the variable involved in it. One specific function is greatest integer function.

Let’s understand about greatest integer functions from the calculation of income taxes. Each income tax table inputs your income and outputs your tax, and that's a function. If your income is not listed in the table then you can use an explicit continuous formula instead (the formula is also piece-wise linear. The slopes of all pieces depend on your income bracket, higher the brackets higher will be the slopes). If your income tax computation is automated by some software application, it uses the same function.

The most common example of the Greatest Integer Function is the Post Office system. Do you know the postage is paid based on weight…. For example, between 1 (including 1) and 2 ounces, you might pay $1.25 postage. However, when you hit 2 ounces to almost 3 ounces you pay $2.00. This progression is a greatest integer function and is currently used by the Post Office system. You could probably get their rate chart and see. What is greatest integer function?

There are infinite integers less than or equal to 2.5.

Out of all of these 2 is the largest integer so that becomes the answer for [2.5].

So we notice that the number we are looking for has to meet two conditions:

What is the greatest integer value of  -1.3?

For the greatest integer value of negative numbers we usually make a mistake. It seems that the value of [-1.3]  = -1.

I am sure you wonder why so. Let us understand this on the number line that follows:- Even from the above graph, we see that x can take any value from the x-axis but y only can take integral values. 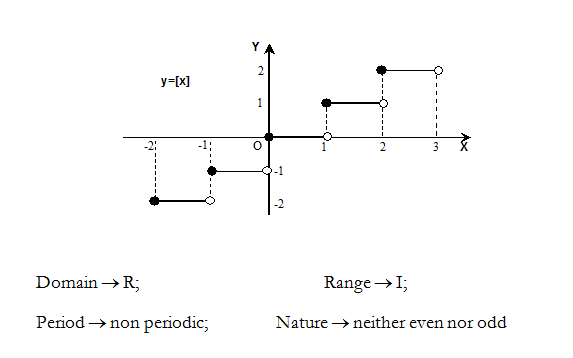 So the domain of greatest integer function is Real numbers and its range is Integers.
For f(x)=[x],Df= R   and Rf=  Z.

The inverse of greatest integer function

A function is invertible when it is both one-one and onto. For checking the one-one function, we take two different values of x from the domain and check if they are connected to different y from codomain.

Here the function is one-one.

For checking if the function is onto or not, we find the range of the function and check if it is equal to codomain or not. In the above function, the range is R and hence it is onto also. And hence the inverse of function exists.

Let us take another example of a polynomial function defined as

If you substitute any value for x from the set of real numbers (domain) the value of f(x) will always exist in reals and it will be different from the previous answer. So we conclude that f(x) defined above is both one-one and onto and hence, its inverse will exist. But every function is not invertible.

How to graph greatest integer function?

The greatest integer function, also called step function, is a piecewise function whose graph looks like the steps of a staircase.

And the sketch will come as follows. Plotting the points on the graph we get the following greatest integer function graph:- 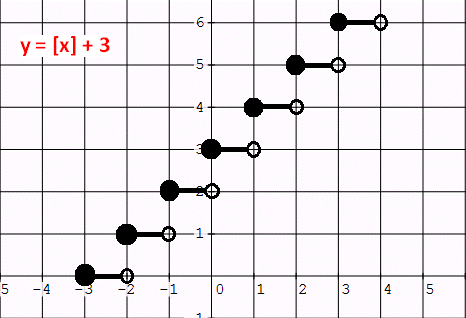 Sia hired an auto-rickshaw. The driver has set a fixed initial cost of $3 and after that, the cost depends on the distance traveled. Suppose the rickshaw driver charges $1 up to each mile then find the cost Sia has to pay while traveling 7.8 miles.

The above problem can be framed as the greatest integer function.

Cost function f(x) can be written as

We can calculate the cost of her travel at any point using the following table. The above plot can be used to understand the problem well.

That means after traveling 7.8 miles Sia has to pay $10

So what we have learned. Let’s recap.

Greatest Integer function is a piece-wise function also called step function because of its graph. It results in an integer equal to or less than the substituted value.

The domain of greatest Integer is R and its range is Z. Greatest integer function is not invertible. 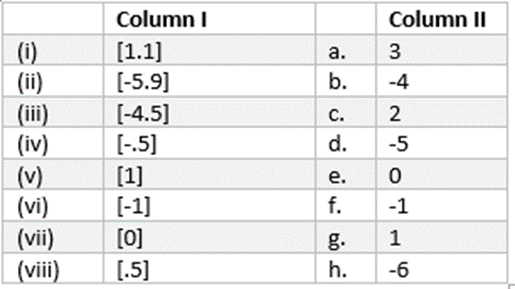 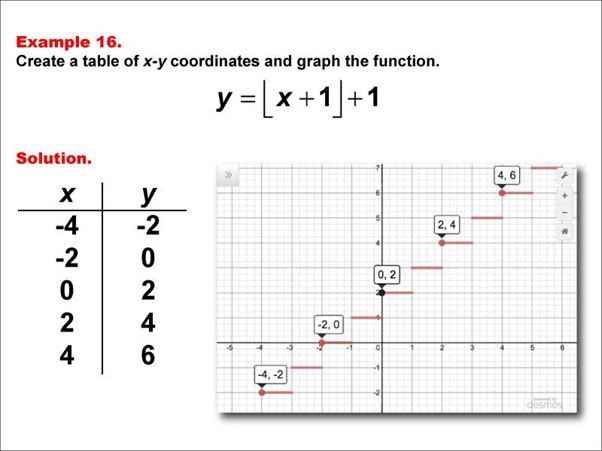