You can read about Arithmetic and Geometric Progressions in our other blogs. This blog will help you understand the comparison between Arithmetic vs Geometric Sequences.

Every year starts with January and has 12 months written as (January, February, March, April, May, June, July, August, September, October, November, and December). This order of months is called a sequence. After January,

it will be February, and after February comes March and so on. We know that we have to follow a sequence before going to next month.

In every row, the number of bricks is reducing by a fixed number. This type of pattern generates an Arithmetic Progression.

Now consider another situation, suppose we know that a rubber ball consistently bounces back ⅔ of the height from which it is dropped and if we have to determine what fraction of its original height will the ball bounce after

being dropped and bounced four times without being stopped? We can solve it using another sequence called a Geometric Sequence or Geometric Progression.

Do you know how is interest calculated in the bank? If you deposit an amount of 20000 in bank then the next year it will become

So you observe every year it is increasing by a constant multiple. This is an example of Geometric Progression.

Arithmetic Progression (A.P.) is the most commonly used sequence in mathematics.

An Arithmetic sequence is defined as a sequence of numbers in which for every pair of consecutive terms, the second number is obtained by adding a fixed constant to the first one. The fixed number that must be added to any

term of an Arithmetic Progression to get the next term is known as the common difference It is denoted by ‘d’. For example:- So common difference is equal to any term minus the previous term.

A Geometric progression (G.P.) is defined as a sequence of numbers in which for every pair of consecutive terms, the second number is obtained by multiplying the first one by a fixed constant. The fixed number that must be

multiplied is known as the common ratio. It is denoted by ‘r’.

So the common ratio is any term divide by the previous term.

That is, the difference between two consecutive terms in an A.P. remains the same. This constant term is known as Common Difference and is denoted by ‘d’.

And the ratio between two consecutive terms in a G.P. remains the same. This constant term is known as Common Ratio and is denoted by ‘r’

This d, and this r is a major contributor to arithmetic vs geometric sequences.

we can find out nth term formula of the A.P. as

and we name it as nth term.

With a as the first term and r is the common ratio, we can find out the general term of a G.P. as 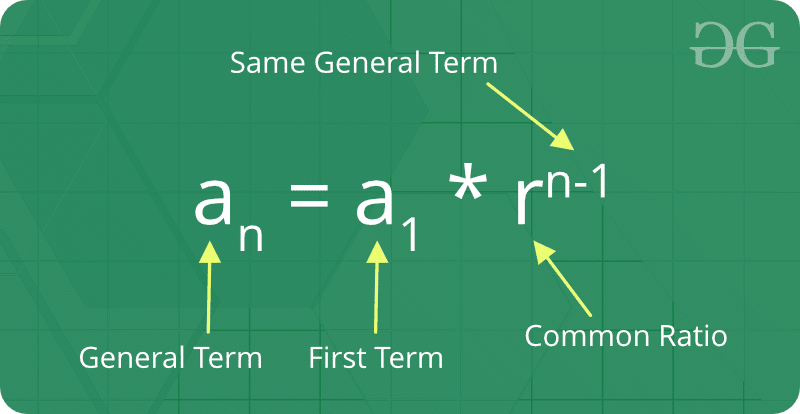 Knowing the formula for the nth term formula we can find out any required term very easily. And the general terms are clearly different for both arithmetic and geometric sequences. 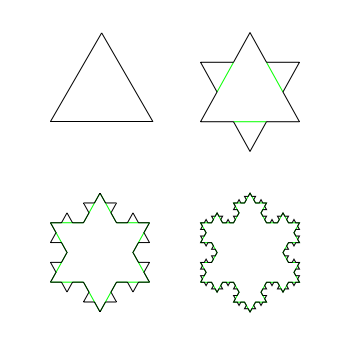 The above pattern is an application of geometric progression. This is called Fractal Diagram which can be used to create interesting patterns. Constructing the Koch snowflake, which follows next, will have the first four iterations as shown above. In each iteration, three triangles are added up to the outside of each side of the triangle. When this is repeated a few times we can get the following pattern. By knowing the value of the first term, common difference, and number of terms of an A.P. we can find out the sum to n terms of the A.P. which will also give us a look into arithmetic vs geometric sequences for the sum as follows:- Any of the above two ways can be applied for finding the sum to n terms of the A.P. Solution:- To find the total number of chairs we need to apply the formula for the sum to n terms of an A.P.

The total number of chairs in the stadium will be 7200.

Suppose a person receives a 5% increase in the salary in 2018 and in 2019 his salary increases by 15%. The average annual percentage increase is 9.88 and not 10.0. Do you know why is it so? You can understand this clearly

by studying the arithmetic mean and geometric mean.

If a, b and c are three terms given to be in A.P. then using the property of A.P. we get

and this b is called the Arithmetic Mean between a and c.

Similarly, If a, b, and c are three terms given to be in G.P. then using the property of G.P. we get

And hence we can observe the clear difference between geometric vs arithmetic mean. This indicates that A ≥ G

More Facts about A.P. and G.P. Have you ever wondered how archeologists in the movies, such as Indiana Jones, can predict the age of different artifacts? Do you know that the age of any artifact in real life can be established by the amount of the radioactive isotope of Carbon 14 present in it? Carbon 14 has a very long half-lifetime of around 5730 years, the amount of the isotope of carbon is reduced by half. Hence, these consecutive amounts of Carbon 14 are the terms of a decreasing Geometric Progression with common ratio of ½.

From our discussion about the topic, we can easily distinguish between Arithmetic vs Geometric Sequences. We can entail the difference to even the most basic concepts of common difference, common ratio, and the two means involved. The difference lies both in formula and the basic concept development of both.

How do we check if the given sequence is an A.P. or a G.P?

Can the common difference be zero?

What will be the change in d if we consider the A.P. in reverse order?

The common difference becomes negative of itself.