A type of sequence is a geometric sequence.

It is a group of numbers that is ordered with a specific pattern ball bouncing is an example of a finite geometric sequence.

Each time the ball bounces its height gets cut down by half. If the ball's first height is 4 feet, the next time it bounces it's the highest bounce will be at 2 feet, then 1, then 6 inches, and so on, until the ball stops bouncing. 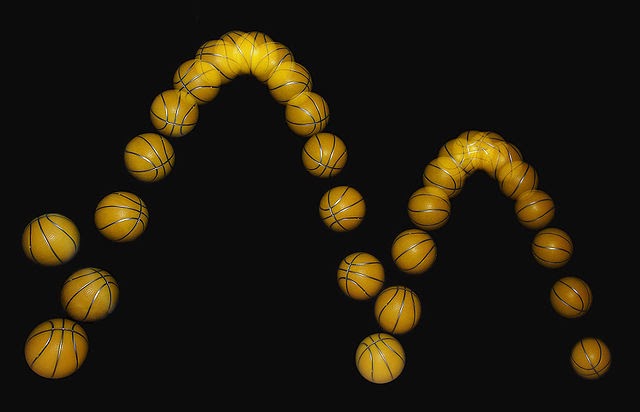 The last row has 56 seats

A geometric sequence goes from one term to the next by always multiplying (or dividing) by the same value.

The number multiplied (or divided) at each stage of a geometric sequence is called the "common ratio" r, because if you divide (that is, if you find the ratio of) successive terms, you'll always get this value.

How to Find Common Ratio

The geometric sequence is based upon the multiplication of a constant value to arrive at the next term in the sequence.

Geometric sequences follow a pattern of multiplying a fixed value (non zero) from one term to the next.

The number has to be multiplied each time it is constant (always the same).

The fixed value is called the common ratio, r, referring to the fact that the ratio (fraction) of the second term to the first term gives in the common multiple.

So, divide the second term by the first term.

Geometric sequences have a non-linear nature when plotted on the graph (as a scatter plot).

The graph x-axis consists of the counting numbers 1, 2, 3,  ... (representing the location of each term), and the range containing the actual terms of the sequence.

Examples: How to Find Common Ratio

Take a scenario where you could have a starting number of 4 and a common ratio of 3.

Note that the first term will be the starting number.

So the first term is:4

Now the second term is going to be equal to the first term (4) multiplied by the common ratio (3); this equals 12.

Again the third term is going to be equal to the second term (12) multiplied by the common ratio (3); this equals 36.

The same for the fourth term is going to be equal to the third term (36) multiplied by the common ratio (3); this equals 108.

Did you notice how geometric sequences grow very fast!

The second Scenario assumes that your friend has the flu virus, and he forgot to cover his mouth when two friends came to visit while he was sick in bed.

They leave, and the next day they also have the flu. Let's assume that each friend in turn spreads the virus to two of their friends by the same droplet spread the following day.

Assuming this pattern continues and each sick person infects 2 other friends, we can represent these events in the following manner: 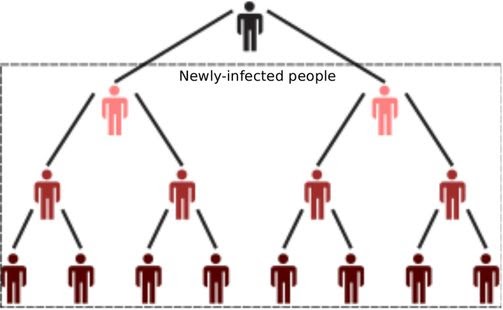 Each one infects two more people with the flu virus.

The above diagram represents the number of infected people after n days since your friend first infected your 2 friends.

Now the virus is carried over to 2 people who start the chain (a=2). The next day, each one then infects 2 of their friends. Now 4 people are newly-infected.

Each of them infects 2 people on the third day, and 8 new people are infected, and so on.

These  process of events can be written as a geometric sequence:

Note the constant ratio (r=2) between the events. Recall from the linear arithmetic sequence how the common difference between terms was established.

In the geometric sequence, we can determine the constant ratio (r) from T2/T1=T3/T2=r

More generally we find the formula for common ratio = Tn/Tn-1.

What is  the common ratio for the geometric sequence:

Divide each term by the previous term to determine whether a common ratio exists.

The sequence is geometric because there is a common multiple.

The ratio, r, can be found by dividing the second term by the first term, which in this example yields -1/3.

What is the common ratio for a geometric sequence whose formula is: an = 4(3)n-1.

A listing of the terms will show what is happening in the sequence (start with n = 1).

We understand from the above examples that one of the two simplest sequences to work with is a geometric sequence.

It is used throughout mathematics. It has important applications in physics, engineering, biology, economics, computer science, queueing theory, and finance.

A key part of the geometric sequence is its common ratio.

The above blog showcased using examples of how to find common ratio in various scenarios.

What is common ratio?

What is the geometric ratio?

To learn more about learning the Cuemath way visit: