Trigonometry is a branch of mathematics that studies the relationship between the sides and angles of a triangle. Trigonometry derives its name from Greek words trigon that means three angles and metron that means measure. The earliest known records of the subject are credited to the Egyptians and the Babylonians. However, Aryabhatta is said to have used the idea of sine function as early as 500 AD! 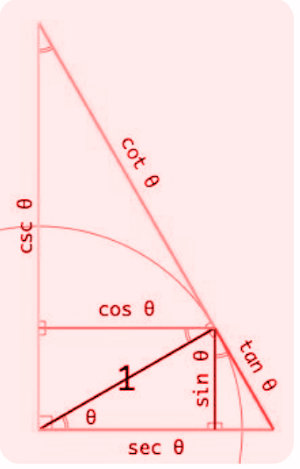 What are Secant Cosecant Cotangent?

Of the 6 trig functions, the first three are fundamental and the other three are derived from the first three functions. We will discuss the three derived functions that are Secant Cosecant Cotangent in detail here. It is important to note here that the six basic trigonometric ratios are closed under reciprocals and complements of angles. In the given right-angled triangle- ABC, we have AB as the side opposite to angle x; BC as the side adjacent to angle x; AC as the hypotenuse of the triangle. The trigonometric formulas are:

The cotangent, also referred popularly as cot or cotan of ∠x is defined as the reciprocal of its tangent. Thus, cot x = 1/tan x = adjacent/opposite = BC/AB.

Similarly, cosecant also referred to popularly as cosec or csc of ∠x is the reciprocal of the sine function. Thus, cosec x = 1/sin x =  hypotenuse/opposite = AC/AB.

Finally, secant, popularly denoted as sec of ∠x, is defined as the reciprocal of its cosine function. Thus, sec x  = 1/cos x = hypotenuse/adjacent = AC/BC.

The values of trigonometric ratios and trigonometric functions are the same for various measures of angles ranging from 0  to 2π. They are presented here in a tabular form for your convenience.

Please note that though their values vary, the signs of cot, cosec, and sec functions remain the same as their parent functions in each quadrant. The following table will help you understand the sign convention of these trigonometric functions better.

Before moving on to understanding the sec graph, cosec graph, and cot graph detail, let us have a look at them. In this section, we present to you the trigonometric graphs of the three derived trigonometric functions sec x, cosec x, cot x. We shall discuss the range, periodicity, and other properties of these functions elaborately in the next section.

Please note that we plot the angles measured in radians on the X-axis and the function value at each angle is plotted on the Y-axis. Further, the signs of the functions in different quadrants correspond correctly in the graphical representation of the functions.

The study of these graphs plays an important role in engineering and mechanical modeling, as well as mapping of different natural phenomena. 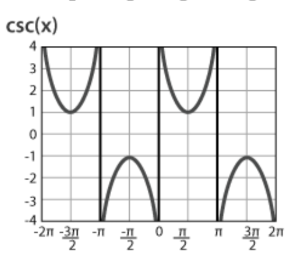 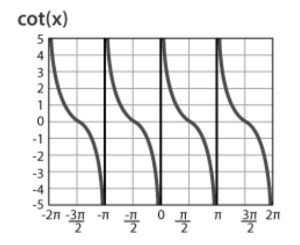 Range Periodicity, and Other Properties

We know that sine and cosine functions are defined for all real numbers. Thus, we notice that for each real number x,
-1 <= sin x <= 1

Range of Cotangent is the set of all real numbers.

Further, the periodicity of the cot, cosec, and sec trigonometric functions can be mapped according to their base functions.

The reciprocal of tan is the cot function. It is defined as the ratio between adjacent and opposite sides of the given angle.