Trigonometry emerged during the 3rd century BC from applications of geometry to astronomical studies. The Greeks used it for the calculation of chords, and Indian mathematicians created the earliest-known tables of values for trigonometric ratios (also called trigonometric functions) such as sine.
Throughout history, trigonometry has been applied in areas such as geodesy, surveying, astronomy, celestial mechanics, and navigation.
Trigonometry is known for its many identities which are equations used for rewriting trigonometric expressions to solve equations, to find a more useful expression, or to discover new relationships. Trigonometry deals with right-angled triangles, where one of the internal angles is 90°. Trigonometry is a system that helps us to work out missing or unknown side lengths or angles in a triangle.

What are Trigonometric Ratios? The Angle of ElevationTrigonometric ratios are frequently expressed as decimal approximations. In this picture, the highlighted angle denotes the angle of elevation of the top of the tree as seen from a point on the ground.
The angle of elevation is always measured up from the ground. It is defined as an angle between the horizontal plane and oblique line from the observer’s eye to some object above his eye. It is always inside the triangle. Eventually, this angle is formed above the surface.
You can think of the angle of elevation about the movement of your eyes. You are looking straight ahead and you must raise (elevate) your eyes to see the top of a tree or think of an elevator that only goes up

The angle of Elevation Formula
Tan θ = Opposite Side/Adjacent Side

The Angle of Elevation 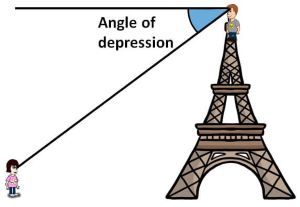 You can think of the angle of depression about the movement of your eyes. You are standing at the top of the lighthouse and you are looking straight ahead. You must lower (depress) your eyes to see the boat in the water. Let us see how the trigonometric ratios of supplementary angles are determined. To know that, first we have to understand the ASTC formula. The ASTC formula can be remembered easily using the following phrases.

All Silver Tea Cups or All Students Take Calculus
ASTC formula has been explained clearly in the figure given below. 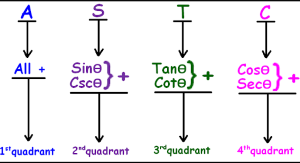 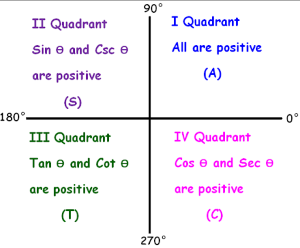 For angles 0° or 360° and  180°, we should not make the below conversions.
Evaluation of Trigonometric Ratios Using ASTC Formula How to learn Trigonometric Ratios?

SOH CAH TOA: an easy way to remember trig ratios
The mnemonic sohcahtoa can be used to help us remember the definitions of the 3 trigonometric functions sine, cosine, and tangent. Here's how it works:

For example, if we want to recall the definition of the sine, we reference
SOH since sine starts with the letter S. The O and the H help us to remember that sine is opposite over hypotenuse. This way SOH CAH TOA or SOHCAHTOA can be used to remember the ratios, using which the other three can be computed further. Solution: Sine is defined as the ratio of the opposite to the hypotenuse (SOH) (from soh cah toa) 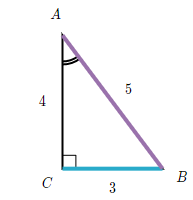 While it may seem as if trigonometry is never used outside of the classroom, you may be surprised to learn just how often trigonometry and its applications are encountered in the real world.

1. Real-Life Application of the Pythagorean Theorem

A huge section of architecture and engineering relies on triangular supports. Trigonometry plays a major role in engineering as it helps to calculate the correct angles to determine the length of cables, the height of support towers, and the angle between the two when gauging weight loads and bridge strength. Trigonometry helps builders to correctly layout a curved wall, figure the proper slope of a roof or the correct height, and rise of a stairway. Trigonometry can be used to determine the square footage of a curved piece of land. Modern power companies use alternating current to send electricity over long-distance wires. Electrical engineers use trigonometry to model this flow and the change of direction, with the sine function. Every time you flip on a light switch or turn on the television, you’re benefiting from one of trigonometry's many uses.

Trigonometry plays a major role in this industry, where it allows manufacturers to create everything from automobiles to zigzag scissors. Engineers use trigonometric ratios and trigonometric formulas to determine the sizes and angles of mechanical parts used in machinery, tools, and equipment. This is used in automotive engineering, allowing car companies to size each part correctly and ensure they work safely together. Trigonometry is also used by seamstresses where determining the angle of darts or length of fabric was needed to craft a certain shape of a skirt or shirt is accomplished using basic trigonometric relationships.

What is sin cos tan?

What are the 3 trigonometric ratios?

The 3 primary trigonometric ratios are sin theta, cos theta and tan theta

How are trigonometric ratios defined?

Cos A = Adjacent side / Hypotenuse

Tan A = Opposite side / Adjacent side

Cot A = Adjacent side / Opposite side

Sec A = Hypotenuse / Adjacent side

Cosec A = Hypotenuse / Opposite side

tan or tangent function is a trigonometric function.

There are 6 trigonometric functions which are:

sine fucntion or sin theta is opposite over hypostenuse

There are 6 trigonometric functions which are: