How to identify Exponents and Powers?

Exponents and Powers are additional operations that go beyond the addition, subtraction, multiplication, and division that have been addressed so far.

Exponential notation is a powerful way to express repeated multiplication of the same number. Specifically, powers of 10 express very large and very small numbers in a manner that is convenient to read, write and compare.

Exponents are used to expressing large numbers in the shorter form to make them easy to read, understand, compare and operate upon.

An exponent indicates the number of times to multiply the base number by itself. In simple terms, how many times a particular number is multiplying to itself, is shown by using exponents. Download the PDF below to understand the properties of Exponents and Powers.

Properties of Exponents and Powers 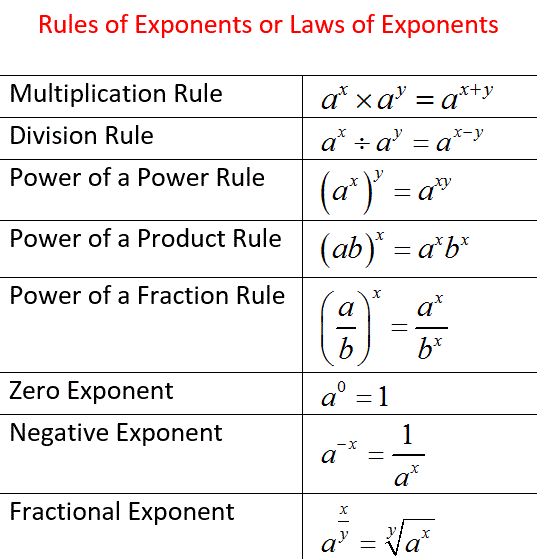 To multiply powers with the same base, keep the base and add the exponents.

To raise a power to a power, keep the base and multiply the exponents.

When you raise a fraction to a power you raise both the numerator and the denominator to the same power.

If the exponent is a negative number, it means the reciprocal of the corresponding positive exponent. In simple terms, it means to do the opposite of multiplication which is division.

Two common types of powers are squares and cubes.

A number can be raised to a power, like 42 = 16 or 23 = 8. This process also can be turned around by asking, “What number squares to give 16?” or “What number would I cube to get 8?” This reverse question is what square and cube roots are about.

Standard Forms of Exponents and Powers

While working in practical experiences, Astronomers, Biologists, Engineers often come across measuring different quantities, where they are working with either large or small numbers.

If a quantity is written as the product of a power of 10 and a number that is greater than or equal to 1 and less than 10, then the quantity is said to be expressed in standard form (or scientific notation).  It is also called an exponential form.

For example: Here, to express it in shorter form or make it easier to handle, so when a decimal is moved 11 places to the left.

Question 1: What is the value of

Question 2: What is the value of

Question 3: What is the value of n, if

Are Exponents and Powers the same?

What are the five rules of exponents?

To know more about exponents and powers, please visit these blogs: