“We can’t solve the problems with the same thinking we used when we created them.”

"Mathematics is a way to settle in the mind a habit of reasoning."

Mathematics is not a subject which only deals with the numbers. Instead, it is a path that helps human beings to develop logical and analytical skills. Logical reasoning or Logical thinking is a cognitive process of looking for reasons for beliefs, conclusions, actions, or feelings.

It is a process of concluding based on the evidence. Analytical skills are the ability to apply logical thinking to gather and analyze the information or data.

There are numerous ways to develop analytical skills. Some of them are

In questions on number and alphabet Series Completion, a series of terms following a specific pattern will be given with some missing terms. The test-taker is expected to identify the pattern followed by the terms and extrapolate it to determine the missing term in the series.

What is Series Completion? How to solve them? is mentioned below in the Downloadable PDF.

What is Series Completion?

A series of terms following a specific pattern will be given with some missing terms called as series completion. We need to identify the pattern followed by the terms and extrapolate it to determine the missing terms in the series.

It is a continuous sequence of numbers, figures, or words that are obtained by some particular previously defined rule. The next term of the series can be obtained by applying the predefined rule.

Tricks to complete the series

Questions on the number series are common in almost all the competitive exams. These questions are based on the numerical concepts that follow a logical rule or predefined set of patterns which is based on the mathematical calculations. Therefore, to solve these kinds of questions, the analysis pattern is very important.

There are generally three kinds of questions that can be asked in number series. They are:

1. Choose the missing numbers to complete the series.

2. Choose the missing numbers to complete the series.

3.  A number is wrongly placed in the series. Identify the wrong number.

Answer: The given series has 2 different series in it.

Finding the Missing Letter(s) in the alphabet series

The first half is from A-M which has 13 letters and the second half starts with N and ends with Z.

Answer: The middle letter is a vowel in the sequential arrangement A, E, I, O without changing the first and the last letters. Therefore, the answer is BUY.

4. Choose the missing letter(s) to form the series:

Answer: The series has groups of alphabets in which the number of alphabet increases from one group to the next from left to right. 2 alphabets, 3 alphabets, 4 alphabets and the next option should have 5 letters.
Therefore, the answer is PONML, which is option (a).

Finding the Missing Figure(s) in the series

The logic behind solving these questions is to have a clear observation. The arrangement is made on the basis of the predefined rule. So, we need to identify the rule and then solve the problem.

1. Find the missing figure in the given series

Answer: Each side of the square is divided into three equal parts. The symbols are arranged in it and the symbols move towards right in every square by one step. The answer is Option (B).

2. Find the missing figure in the series

Answer: Arrow head keeps getting added from one box to the other. The answer is Option (A). 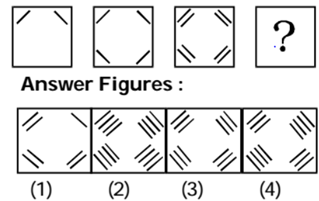 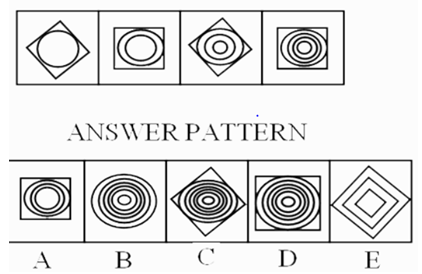 Answer: The number of Circles inside the square keeps increasing from first pattern to the next. The square keeps rotating and in this sequence, the answer is Option C. 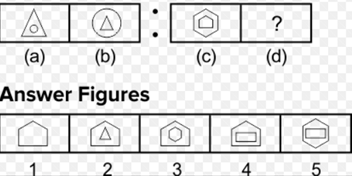 What is figure series completion?

In these set of problems, a series of figures is given and the students are asked to select one of the figure from the set of options provided to continue the given sequence.

What is number series?

In these set of problems, a series of numbers is given and the students are asked to select one of the correct number from the set of options provided to continue the given sequence.