What is Origami? How does it benefit the Kids?

Origami, the art of paper folding, is one of the activities that kids enjoy a lot. It is associated with Japanese culture.

The goal is to transform a flat square sheet of paper into a finished sculpture through folding and sculpting techniques. Modern origami practitioners generally discourage the use of cuts, glue, or markings on the paper. Origami can be a great way to teach students and give them ideas about different shapes, figures, and sizes. Children can learn about maths at home through fun activities that inspire conversations about numbers, geometry, and spatial relations. The same sheet of paper can look completely different depending on where and how it is folded.

The art of Origami or paper folding for kids has received a considerable hold over mathematical study.

Get ready to brainstorm new ideas, develop fine motor skills, impress your friends, and learn some interesting mathematical notions through this blog regarding Origami for kids.

What are the benefits of Origami?

Origami helps to understand and develop:- 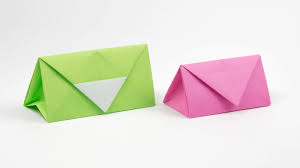 How to make things with Paper Origami?

After a lot of learning, let’s move ahead with the fun part. As you will be amazed to know that the techniques of Origami activity can teach you exceptional mathematical skills, similarly, you will be enthralled to make practical models using a simple piece of paper.

In this article, we have brought to you a step-by-step approach to 5 simple things that can be made using origami techniques.

Step 1: Fold the square paper diagonally, from both the sides, making a triangle and unfold it, as shown in figure 1.

Step 2: Fold the top of the paper down towards the central line of symmetry, as shown in figure 2.

Step 3: Fold the top layer outwards once again, as shown in figure 3, along the dotted line.

Step 4: Fold the tip of the paper down (inside) along the dotted line, as shown in figure 4.

Step 5: Now fold the paper into half, vertically, as shown in figure 5.

Step 6: Fold the paper back along the dotted line on both sides, as represented in figure 6.

Your paper boat is ready! Step 2: Fold both the corners inside, as shown in figure 2.

Step 3: Fold both flaps of paper outside, as shown, along the dotted lines - represented in figure 3.

Step 4: Fold the top part of the paper down and the bottom two layers up and backward along the dotted lines - shown in figure 4.

Step 5: Turn the paper upside down and fold the top part of the front triangle down along the dotted line - shown in figures 5 and 6.

Your paper cat face is ready! Give some touch-up as shown. Step 1: Fold a square paper diagonally and symmetrically making a triangle, as shown in figure 1.

Step 2: Fold the bottom vertex to meet the opposite side of the triangle, as shown in figure 2.

Step 3: Fold the other two vertices towards the center facing upwards as shown in figures 3 and 4.

Step 5: Fold the left ear diagonally to the left side, and the same with the right ear, as shown in figures 8 and 9.

Step 7: Turn it upside down and give it a makeover to make it look like Pikachu. 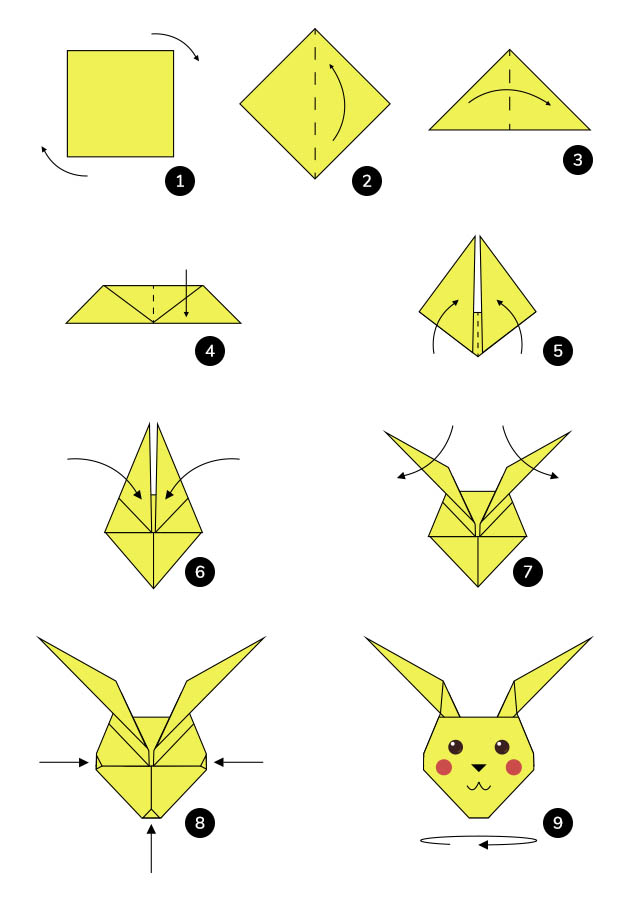 4. Rabbit face as an Origami activity

Step 1: Fold a square paper diagonally and make a triangle, as shown in figure 2.

Step 2: Fold it symmetrically from the center again, as shown in figure 3.

Step 3: Unfold the second fold, as shown in figure 4.

Step 4: Fold a small portion of the largest side of the triangle upwards, as shown in figure 5.

Step 5: Fold the left and right bottom edges up towards the center forming the ears of the origami rabbit. This is shown in figures 6 and 7.

Step 6: Turn the figure upside down.

Step 7: Fold the top corner of the head downwards and inwards as shown in figure 9.

Step 8: Fold the bottom corner of the chin upwards and backward as shown in figure 10.

Your origami rabbit is ready. 5. Making a Fox using the techniques of Origami

Step 1: Fold the square piece of paper diagonally in half, making a triangle, and then unfold it. Follow as shown in figure 1.

Step 2: Do the same, matching the other two corners also.

Step 3: Fold the left and the right vertices of the triangle inside towards the center meeting the third vertex and forming a square again. This is represented in figure 3.

Step 4: Fold the paper in half backward, as shown in figure 4.

Step 5: Open the tips of the paper and fold it outside as shown in figure 5 to make the head.

Step 6: Turn the model to make it sit upright, as shown in figure 6.

Step 7: Fold the side along the dotted line to make the tail, as shown in figure 7.

Your Paper fox is ready. Research says students who use origami in math perform better. There are a lot of simple and easy skills to learn in Origami activity. Mathematical ideas that are difficult to grasp become crystal clear.

High-school concepts can be very easily understood by children in lower grades. That is the beauty of Origami!

Many origami books begin with a description of basic origami techniques which are used to construct the models. This includes simple diagrams of basic folds like valley and mountain folds, pleats, reverse folds, squash folds, and sinks. There are also standard named bases which are used in a wide variety of models

Cuemath comes up with regular articles on varied topics, providing positive thinking and direction on different issues faced by children and parents.

Many studies assert that origami was invented by the Japanese about a thousand years ago, but its roots may well be in China.

What are the benefits of origami?

Origami excites other modalities of learning. It has been shown to improve spatial visualization skills using hands-on learning.

What is the most popular origami shape?

Crane. The traditional origami crane is perhaps the most popular example of origami. It uses a bird base, which is a square base plus two petal folds.