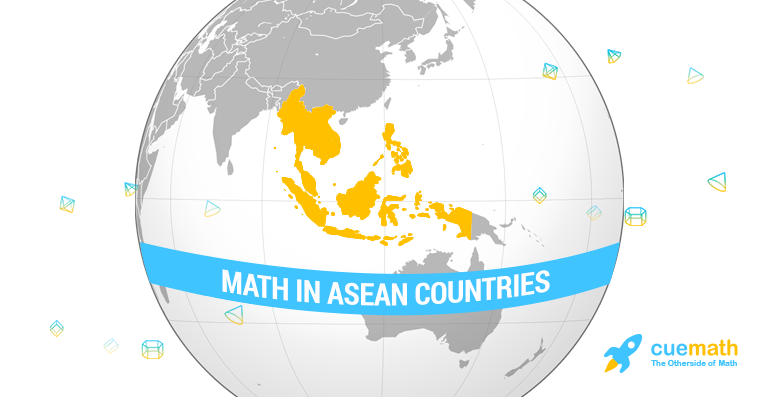 On 26th January 1950, when India celebrated its first Republic Day, the Chief Guest was a Southeast Asian leader, the President of Indonesia. In 2018, leaders from 10 ASEAN (Association of Southeast Asian Nations) countries were invited to the ceremonial parade at Rajpath. That was the first time that ten heads of state will be chief guests at our Republic Day celebrations.

The ASEAN member countries namely, Thailand, Vietnam, Indonesia, Malaysia, the Philippines, Singapore, Myanmar, Cambodia, Laos and Brunei, each have their own educational systems. While we have heard a lot about the effectiveness of Singapore’s math education system, not much is known about how the other countries teach math.

In this context, let’s take a look at how the math education differs in each of these countries.

Here is a PDF that tells about math education in ASEAN countries and their diversity. Click on the download button to know more.

The primary education in Singapore is stripped down when compared to most countries. Fewer topics are covered but in great depth. Andreas Schleicher, Head of OECD’s (Organisation for Economic Cooperation and Development) Education Assessment Program says, “Math in Singapore is not about knowing everything, It’s about thinking like a mathematician.”

Singapore’s curriculum was developed by a team of teachers in the 1980s. This team studied behavioral research and traveled to other countries to compare the effectiveness of different teaching methods.

Today, Singapore is ranked among the top 5 countries for the quality of the math education system and the performance of their students.

A few decades ago, the Philippines was always close to the bottom in terms of international rankings for math and science. However, over the last few years, the students of Philippines have managed to beat China and Hong Kong in various math competitions. This turn-around happened due to the reform of their K-12 education. The big change is the complete upgrade in content. Today, learners learn all the areas of mathematics starting in Kindergarten. The learning is enhanced little by little as the learners go up the ladder of basic education.

Vietnam has recently moved from a broadcast teaching method to more interactive learning methods in the classrooms.This shift happened during the early 90s. Educational experts in Vietnam called for a reform of the previous education system where the teacher would do 90% of the work in the class. Today, students are made to approach topics using the concrete-pictorial-abstract method. This ensures that students grasp the mathematical concepts easily.

In the year 2006, a new curriculum for math was designed and released to the children in Brunei. Before that, many educational experts feared that most students were beginning to dislike math because they lacked a connect to it. It was noticed that students were not applying mathematical thinking in their activities. In 2006, a new curriculum was introduced which was designed to make children think mathematically and solve everyday problems with ease.

In Cambodia, the belief is that math is the key to understanding many other subjects. They also know that math is at the heart of economic, environmental and social development in any country. Curriculum designers in Cambodia stress on the importance of being up to date with the rest of the world. Therefore, the curriculum of math in school is updated every five years.

However, a study conducted on math education in Cambodia revealed that most of the textbooks used in Cambodian schools are written by experienced local teachers. The standard of these textbooks, therefore, won’t be at par with international standards. This is something that the educational experts are working on currently.

In Laos, the education system is centralized which means that the curriculum throughout the country is set on the same standard. The Laos government believes that education of the masses will help them develop as a country. Along with this, the government also encourages the citizens to keep up with technology outside the country and to maintain and protect their cultural interests.

A study on math in Indonesia was conducted few years ago, keeping the IMO results as a comparison point. Indonesia was above average as far as the results were concerned. However, the government believes that there is a lot of room for improvement in their education system. As a practice, the country focuses on helping low performers, however, many experts are of the opinion that even highly talented individuals should be nurtured in order to produce global competitors.

According to a study by OECD in 2013, Malaysia ranked 52nd out of the 76 countries in the study. The study was based on math and science scores. The students of Malaysia scored an average of 421 in Math which was far below the mean score of 494. The government of Malaysia is planning and revamping the education system in their countries. A special programme under the Prime Minister Department was formed in 2012 to cater to the talented and high achieving students.

Burmese education has been more or less traditional in the past with monasteries educating young children on basic arithmetic and social skills. Myanmar’s education is yet to catch up with the rest of the world. The main reason for this is lack of resources. Most schools have very high school fees which a lot of poorer families cannot afford. According to UNESCO figures, the average adult in Burma has received only 2.8 years of schooling, and only 36.5 percent of eligible students enrol in secondary education.

What used to be one of the best educational systems in the world has failed to keep up with the advance of technologies so far. The government has planned for a complete reform.

Thailand is on its way to great education reform. As soon as the government realised that there was a shortage of good teachers in Thailand, they came up with the plan of making math more interesting. This was done in the hope that more students would pursue their higher studies in math and teach the next generation. The government has also decided to change the math curriculum and discourages rote memorization.

From the above snippets, it is quite obvious that more people are turning towards developing mathematical and analytical thinking among their students. These are the only skills of the future and need to be nurtured right from childhood.

Mathematics has been a very important subject for the children all across the world. But its curriculum differs considerably in several countries with a common ultimate aim of optimising the math education in their respective countries.

The structure of the curriculum in each country depends on many parameters like the average scores of students in the country, the total number of students as well as qualified teachers, the functioning and the role of government in these areas and many more.

Hopefully, each and every country in the world will be able to optimise their math education at some point of time which will help in building a solid foundation for the upcoming generations.

Why is Mathematics important for the development of the countries?

Who are some great Mathematicians from the countries mentioned above?