The First Woman to receive a Doctorate: Sofia Kovalevskaya

Who was Sofia Kovalevskaya?

Nobody ever thought that a Middle girl child of a Russian minor nobility family raised in a plush environment could become not only the First female Mathematician who obtained a Doctorate but also the first woman appointed as a full-time Professor in northern Europe. She was also a writer and one of the first women editors of a scientific journal. According to Science Historian Ann Hibner Koblitz, Sofia Kovalevskaya was the greatest known woman scientist before the twentieth century.

She was born on 15th January 1850 in Moscow, Russian Empire. Her father Lieutenant General Vasily Vasilyevich Korvin-Krukovsky was the head of Moscow Artillery of the Imperial Russian Army before retiring to Palibino. Her mother, Yelizaveta Fedorovna Shubert (Schubert) was from a family of German immigrants to St. Petersburg who lived on Vasilievsky Island.

Being the middle child she always felt neglected and was not a happy child. She had two siblings, her elder sister Anya and the younger brother Fedya.

Being a girl child of a Russian nobility family she was brought up by a strict Governess which made her fairly nervous and withdrawn. Download the PDF below to read about the life and achievements of Sofia.

Kovalevskaya’s parents provided her with a good education. She was fond of Mathematics from a very young age. She claims that she had studied her father’s old calculus notes that were pasted in her nursery wall in replacement of wallpaper. In fact, it was from the mere age of 11 that she started studying Calculus.

Her uncle Pyotr Vasilievich Krukovsky played a great role to spark her curiosity in Mathematics. Pyotr had a great interest and respect for mathematics and discussed numerous concepts of mathematics with her autobiography she had mentioned that,

“The meaning of these concepts I naturally could not yet grasp, but they acted on my imagination, instilling in me a reverence for mathematics as an exalted and mysterious science that opens up to its initiates a new world of wonders, inaccessible to ordinary mortals.”

Y I Malevich was her 1st Math tutor and it was under his supervision that Sofia started her proper math study.

She was so in love with Mathematics that she started neglecting other subjects. So his father decided to stop her Math lessons.

She had learned Trigonometry by herself at the age of 14 to understand a research paper of her neighbor and scientist Professor Tyrtov, on the optics section of Physics. Professor Tyrtov was impressed and noted Sofia’s aptitude skills and grasping capabilities and convinced her father to allow her to go to school in St. Petersburg to continue her studies. Professor Tyrtov called her new Pascal.

After finishing her secondary education Sofia wanted to pursue her higher studies at the university level. However, the nearest university for women was in Switzerland.

At that time young and unmarried women were not permitted to travel alone. So in 1868, she contracted into a "fictitious marriage” with Vladimir Kovalevsky. They moved from Russia to Germany in 1869, to pursue her higher studies.

How did Sofia change the world of mathematics?

While at Petersburg Sofia got unofficial permission to complete her matriculate in the university. Sofia studied there for three semesters. According to a fellow

“Immediately attracted the attention of her teachers with her uncommon mathematical ability. Professor Königsberger, the eminent chemist Kirchhoff, .... and all of the other professors were ecstatic over their gifted student and spoke about her as an extraordinary phenomenon .”

After completing the study in Petersburg Sofia decided to pursue her study under one of the most renowned Mathematicians of that time Karl Weierstrass, which led her to the University of Berlin. But there also she was not welcomed as female students were often not.

But Weierstrass noted her talent and thirst for Mathematics so he decided to tutor her privately.

Sofia continued to research under Karl Weierstrass for four years. At that time she completed three doctoral papers. They were: “On the Theory of Partial Differential Equations,”

“On the Reduction of a Certain Class of Abelian Integrals of the Third Rank to Elliptic Integrals,” and

“Supplementary Remarks and Observations on the Laplace’s Research on the Form of Saturn’s Rings.”

But this was not the end of the struggle. Even after earning a Ph.D., she was unable to get a job just because she was a woman. 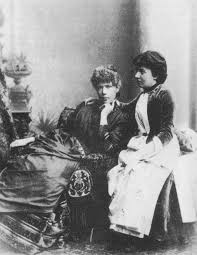 But she did not stop trying and later in 1880, finally, she got a call from Russian mathematician Chebyshev to present a paper at a scientific conference in Sweden. Sofya was able to use her paper on Abelian Integrals which she had written while being tutored by Weierstrass. Sofya’s presentation was a big success and she was invited by a University of Sweden to teach.

In 1883 she moved to Stockholm and took the job as a lecturer at the University of Stockholm. In the beginning, it was a temporary position but by proving her talent repeatedly after five years she gained a permanent position as a Professor of higher Analysis. She became the first editor of a Mathematical Journal Acta Mathematica. She was the first woman to be held that post. At that time she published another research paper on Crystals.

In the same year, she was appointed the Chair of Mechanics and also Published another paper “On the propagation of light in Crystals”, but unfortunately this paper was flawed.

Later in 1888, Sofya participated in a contest Prix Bordin, organized by ‘The French Academy of Science’ and the topic was ‘The theory of the rotation of a solid body’.

To be fair to determine the winner the papers were submitted anonymously. For the identification, authors were supposed to write a quote that can be verified later. Sofya won the contest and the evaluators were so impressed by her work that they have increased the prize money from 3000 to 5000 Frances and later everyone came to know that it was a woman who won Prix Bordin. Sofia’s paper developed a theory for the motion of a rigid body around a fixed point where the body is asymmetric. Sofia’s paper was the continuation of the work of Leonard Euler and Joseph-Louis Lagrange. Euler proposed a model where the center of mass is at the fixed point and it can be demonstrated by a spinning top. Lagrange demonstrates another model by modifying Euler’s work by exploring a top with the center of the mass at the center of the top.

For her paper, Sofia found a solution. She used a solid-like Euler but added a heavy object to one side of it. She then created new equations and much more complicated integral.

Despite having a Ph.D. and being a member of the Russian Academy of Science, she did not get a job in Russia.

Legacy she left behind

According to Historian of Mathematics Roger Cooke, “ the more I reflect on her life and consider the magnitude of her achievements, set against the weight of the obstacles she had to overcome, the more I admire her.”

In her whole life, Sofia played an important role in Mathematics as well as in obtaining equal rights for women. The school set up by Sofia in Russia later became very influential in pioneering women’s education.

Sofia had to overcome many gender discrimination to achieve things that are very basic to us.

Sofia Kovalevskaya made a significant impact on mathematics. Cauchy-Kovalevsky Theorem was the most important contribution.

Many Mathematicians, such as Poincare and many others applied her method to their work and some of her methods are described in the modern textbook and applied to other topics of theoretical physics.

Sofia Kovalevskaya was a mathematical legacy, she published ten papers in Mathematical science.

Sofia is most known for her work on the rotation of a rigid body.

It can be seen that Sofia Kovalevskaya was very influential at her time as well as now. She was a Mathematician as well as a writer and women rights activist. She struggled her whole life to get the well-deserved recognition for her work. Since 1985 The Association for Women has organized ‘ Sofia Kovalevskaya’ Day.

Sofia Kovalevskaya was a great mathematician who despite all odds of her time, became the first female to receive a doctorate. She completed three doctoral papers.; “On the Theory of Partial Differential Equations,” “On the Reduction of a Certain Class of Abelian Integrals of the Third Rank to Elliptic Integrals,” and “Supplementary Remarks and Observations on the Laplace’s Research on the Form of Saturn’s Rings.” Sofia has left behind a legacy which will be remembered for centuries.

1. What did Sofia Kovalevskaya discover?

2. When did Sofia Kovalevskaya die?

3. Where did Sofia Kovalevskaya go to college?