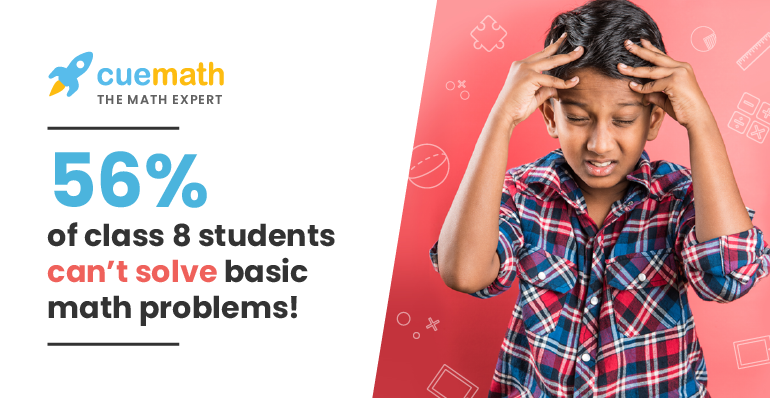 In 2015, India witnessed the passing of a law that stated that no student will fail in their education curve till they reach 8th grade. While this news was largely positive 2018, however, had a different story to tell – the majority of 8th grade students in India cannot solve even basic math problems!

In the Annual Status of Education Report (ASER), NGO Pratham found that there has been a drop in the math learning curve in the past few years wherein a striking-

The main reason for these statistics can be attributed to the fact that math is not taught in a way that it should be at schools. Schools usually follow a broadcast form for teaching, wherein one teacher has to cater to the learning needs of an entire class of students. Learning needs differ student to student and this faulty system results in some children not grasping math concepts as effectively as other in the classroom.

We at Cuemath, understand the fact that every child is different and has a different learning curve. Our teachers are trained to match up to your child’s learning pace, allowing them to understand mathematical concepts as life skills that can be applied rather than as a subject. Our beyond school math learning program helps your child understand the WHY behind the WHAT of math concepts, cueing them to reach logical mathematical solutions on their own.

In the Indian education system, a child completing their 2nd grade is expected to be able to read simple text and perform basic math operations such as subtraction. Though there has been a gradual increase in the percentage of students achieving this outcome, the absolute number is still just a quarter of the overall number of students.

Not only is it appalling to see such stats despite the Right to Education Act, but the numbers also get worse as one progresses to higher levels in their education.On comparing data sets from 2014 and 2018 the percentage of students who can solve basic numerical division problems in different grades showed a positive increase in the lower grades, but by the 8th grade, the number fell from 44.1% in 2014 to 43.9% in 2018.

It’s high time you put some thought in the way your child learns math at school.