WORK FROM HOME AS A CUEMATH TEACHER IN AHMEDABAD Gujarat is a state known for its strong entrepreneurial spirit. Then how is the story of Sheetal Biradar special?

She is a woman. Her journey carries ahead a legacy of other women entrepreneurs from the state and also shines as a beacon for aspiring women in the future.

Today, she is helping the students in her neighbourhood understand and love math and she does this from the comfort of her home.

A brief conversation with her revealed how charged up she is with her new role as a Cuemath Teacher. 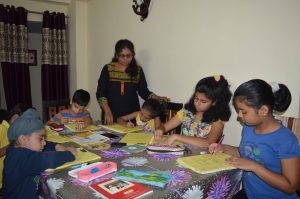 Sheetal was a disciplined and diligent student and math had always been her favourite subject. She decided to pursue a course in engineering because she felt she was cut out for it. After graduating with flying colours she got a job with a software company in Hyderabad where she worked for a year.

She then got married and moved with her husband to Pune. Sheetal spent 4 years working in a company called Amdocs. From there, she shifted to another company in Mumbai and worked for another 3 years before finally settling down in Ahmedabad.

Talking about the Teacher Convention that she attended in Bangalore, she says, “This was a wonderful experience. I got to meet the leaders that are driving Cuemath ahead as well as other Cuemath Teachers like me. I was inspired to become more than a teacher here!”

She ended the conversation explaining that it is important to enjoy one’s work in order to perform well and with Cuemath, she has the perfect platform to showcase her talents and prep young minds.

Between all these shifts, Sheetal gave birth to two beautiful children and realised that her daily office routine was becoming more and more hectic. Although her company allowed her to work from home, she found it very difficult to dedicate time to her children and her job simultaneously. In 2014, she decided to take a break from her job to concentrate on bringing up her daughters.

Sheetal was looking for the best educative material for her children. She came to know about Cuemath through her colleague Ramika Julka, who is also a Cuemath Teacher in Pune. After a brief visit to the website, she realised that children all around the country should have access to a program like this from the time they begin school itself!

“I used to struggle in aptitude tests when I was a student. Something like Cuemath, will help children build their aptitude skills.

I remember that in my time, we were separately trained for aptitude tests after the 12th grade. Cuemath though, has brought it into the regular curriculum for children.

Realizing this helped me in my decision to become a Cuemath Teacher.”

After getting certified in September 2016, Sheetal visited the common playground in her society and spoke to a lot of parents there. She managed to enrol around 8 students in this way.

“My secret is that, I tell parents that my own children are learning math with Cuemath. This makes them more confident and then the results speak for themselves.”

Currently with 10 students enrolled, Sheetal is loving her new role as a mentor to these children.

She says, “It’s so great that I can set up two full sessions in my house itself. I’m there for my children when they need me. More than that, I’m in a wonderful network of women like me who understand how important it is to give back to society.”

Sheetal believes that women are much more capable than what society sees them as. She explains that for mothers like her, life becomes tough once children begin to grow.

“It’s not easy to be a homemaker, let alone a working mother. There are so many promises we make to our children and sometimes end up breaking them because of our jobs. Then our children begin to grow and we miss out on their childhood so much.

I’m so grateful to Cuemath for realising this and bringing us all together.”

Sheetal also exclaims that the support she receives from the team is extremely uplifting.

“If I have any doubts, they are cleared immediately. The entire team is very motivating and when somebody gives you immense positivity, you would feel like doing your best, isn’t it?”

Talking about the Teacher Convention that she attended in Bangalore, she says, “This was a wonderful experience. I got to meet the leaders that are driving Cuemath ahead as well as other Cuemath Teachers like me. I was inspired to become more than a teacher here!”

She ended the conversation explaining that it is important to enjoy one’s work in order to perform well and with Cuemath, she has the perfect platform to showcase her talents and prep young minds.