Numbers up to 2-Digits

Introduction to Numbers up to 2-Digits

We begin counting numbers on the fingers of our hands at a very young age, and then go on to using supercomputers to crunch numbers which are very large. Whatever be the count of digits of a number, the correct placement of each digits is most important. Today we will discuss \(2\)-digit numbers, but before that, let us familiarize ourselves with single digit numbers. There are \(10\) single digit numbers \(-0, 1, 2, 3, 4, 5, 6, 7, 8,\) and \(9.\) All the double digit or \(2\)-digit numbers we will discuss are combinations of any two of nine of these ten numbers. Yes, \(0\) is not always counted, and we will come to that later. 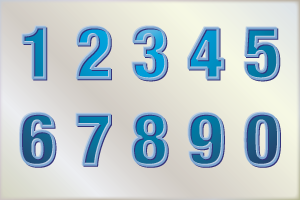 The Big Idea: Numbers up to 2-Digits

Every number which has more than \(1\) digit has to have the different digits described by their place values. The place values we use are units, tens, hundreds, thousands, ten thousands and so on. You will notice that each of the consecutive place values is ten times the previous one. When we limit ourselves to \(2\)-digit numbers, therefore, there are only two place values in play – the units place and the tens place. 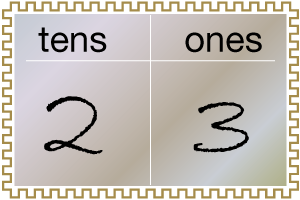 This is exactly what is done when we create \(2\)-digit numbers. So, every set of ten units becomes a number with a place value of ten, just like the shopkeeper made 1 tub by combining \(10\) ice cream cups. Let us look at \(3\) sets of numbers to understand the conversion of units to a combination of units and tens:

I am sure you have been able to make out that only the first one is correct. The second one has the tens place wrong, and the third one has the units place wrong. This is what the right combinations would be for both sets: Let us see if you know the answers to the following \(5\) questions:

The Significance (or otherwise) of Zero in \(2\)-digit numbers

Since we already know that a \(2\)-digit number can be formed by combinations of two of the \(10\) digits from \(0\) to \(10.\) But what about those numbers which have \(0\) in the ten’s place value? Let us consider the number that would be formed by zero in ten’s place and five in unit’s place.

So it actually becomes a single digit number. But that is not the case when the zero is in the unit’s place. Let us try exchanging the numbers this time, and take five in ten’s place and zero in unit’s place.

So when it comes to zero, there are nine options which have zero in ten’s place when the number formed is a single digit number, irrespective of which number is in the unit’s place.