Numbers up to 6-Digits

Introduction to Numbers up to \(6\)-Digits When we move to a greater number of digits in the following modules, we will also touch upon the international numbering system. For now, it will suffice to understand that there is no particular name for a lakh in the international system, and it is simply referred to as a hundred thousand.

Based on the details given above, you can understand that as per the Indian numbering system, there would be two commas used in any six digit number. The first would demarcate the first three digits (from right) to show how many thousands there are, and the next would come after the first \(5\) digits from the right to show how many lakhs there are in the number. For example, you would write \(372672\) as \(3,72,672\) to mean that the number has \(3\) lakhs, and it has \(72\) thousand.

How To Decompose \(6\)-digit numbers

How is it important 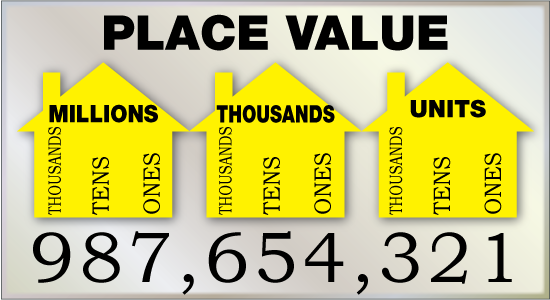 Tip: Create a chart with all the place names listed. Let children see how till ten-thousand the naming convention is the same. But for 6 digits or higher the same number has two names. The choice of names does not change the value of the number. “One lakh” and “one hundred thousand” are equal (have the same value).

Tip: Remember the number of zeros after 1 for two large numbers. E.g. remember that “one crore” is 1 followed by 7 zeroes. And “1 million” is 1 followed by 6 zeroes. All other larger or smaller numbers can then be written with reference to these two numbers.

Trick: Children tend to make mistakes when rounding off a number. If we want to round off 4,63,859 to the nearest thousand, it helps to simply underline all digits that are in the lower place values (ones, tens and hundreds, in this example). Then simply replace those digits with 0. While doing this check the highest place value we are replacing - hundreds place in this case. If that is 5 or higher increase the thousands place by one. So the rounded off number will become 4,64,000.