Go back to  'Addition & Subtraction'

Let’s say you go to the supermarket and pick 2 packets of tomatoes. One packet has 4 and the other has just one. Now, you put all the tomatoes together in one packet. How many tomatoes will that packet have? The packet will have 5 tomatoes. Putting together of quantities is nothing but an addition. To help your child visualize the operation, addition is putting two or more groups together to end up with a larger group in the end.

These are just a few examples showing how addition gets introduced at an early stage.

Addition can be best introduced using real-life objects, and some visual models like 10-frame, number line, 20-frames. The smaller numbers make it easier to understand the concept. As you can see in the image given below there is a number line showing starting at 5 if you take 7 jumps then you will reach 12. Which is nothing but 5 + 7 = 12.

Another simple idea used for the addition of two numbers is the concept of place value. As the numbers become bigger, they gain place values. The key concept to remember is that ONLY like places can be added at a time. So, if you have a four-digit number let's say1423, being added to a three-digit number let's say 176, the addition would look like as shown below. The digit

So, in order to add 1423 and 176, you write both the numbers one below the other in such a way that the place values are all aligned. So, it would look like this:

In ancient times, simple additions were done with the help of a simple, yet powerful instrument called the abacus. 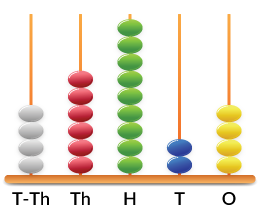 Here is an interesting to visualise addition. Know what happens when you carry while adding numbers.

In the above example, adding two digits result in a value less than 10. But what happens if the sum of a particular place value exceeds 10? We then carry over the value to the next higher place value. But why specifically 10? It is because we have a base-10 number system.

Let's take another example to understand this better. Let's say we ahve to add 1476 + 246. The first step is to place the number under the right plae values. As shown below.

Now start adding the numbers from the ones place, if a value exceeds 10 then carryover to the next higher place value.

This generally happens once again due to an incomplete understanding of place values and the idea of addition. Rather than telling students to simply align numbers from the right, it is better to ask them to model this addition problem using Base-10 blocks so they understand why the numbers are aligned from the right.