Go back to  'Exponents, Squares, Cubes'

Long years back, there was a King who also loved to play the game of chess. One day a travelling hermit visited his court. As was his habit, the King challenged him to a game of chess, and also said that if he won, he could choose his own reward. The hermit said that if he won, the King should give him as many grains of rice as could be placed on a chessboard in the following manner : one grain on the first square, two on the second, four on the fourth, eight on the fifth, and so on, doubling the number of grains at each square. The King laughed at this strange and humble sounding demand for (what he thought was) a handful of rice grains and began to play. To his misfortune, the King lost the game, and the measuring of the rice grains began. There are 64 squares in a chess board, and here are the rice grains for just the first 15 of them: 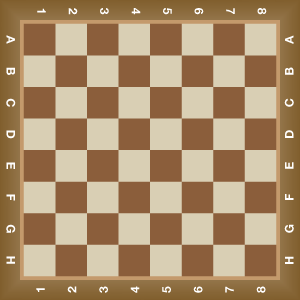 As you can see, just the first 15 squares out of the 64 gave the hermit a total of more than 32000 grains!! This is called the power of compounding, because in each step the number is doubled. Suffice to say that this seemingly small number of 2 multiplied 64 times ensured that the King had to give a huge quantity of rice grains to the hermit.

The Big Idea: What are exponents?

Just like 2 was multiplied over and over again in the above example, exponents are the word used to explain the operation of multiplying a certain number by itself. So if you multiply the number 5 by itself seven times then you say that 7 is the exponent of the base 5, and this is how the number is written and calculated:

In the above example, 5 is the base, while 7 is the exponent and is also called power. So, 57 can be described as the base 5 raised to the power 7. 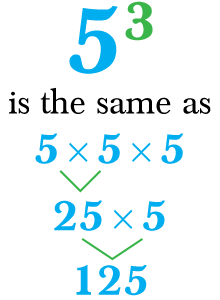 Why exponents are important?

In the story of the King and hermit above, if the hermit was to tell the number of grains to the King, neither would he be able to explain or name the number properly, nor would the King be able to comprehend the number easily.

The concept of negative exponents

When you see a number with a negative exponent, it also means that the same number is divided by one. Here are two examples for you to understand:

The multiplication and division of numbers using exponents uses additions and subtraction. Let us see this with an example.
Say you wish to multiply 25 x 28 Instead of multiplying 25 with 28, you can write the expression as:

Similarly, when we need to divide, then we subtract.