Go back to  'Factors, Multiples, Primes'

A multiple is a number obtained by multiplying the given number by another whole number.

How to find LCM of 2 numbers?

There are 3 methods to calculate the LCM of two numbers,

1. By listing out the common multiples

Step 2 - Circle all the common multiples

Step 3 - 20 is the number that is there in both the lists. It the smallest common number in the list

Let’s try and figure out LCM of 60 and 90 using the prime factorization.

Step 1 - Represent the numbers in the prime factored form

Step 2 - Multiply all the prime factors however, the common factors will be included only once.

Step 1 - Find a prime number which is a factor of at least one of the given numbers. Write this prime number on the left of the two numbers (as shown).

For each number in the right column, do the following:

Step 2 - If the prime number in step 1 is a factor of the number, then divide the number by the prime and write the quotient below.

If the prime number in step 1 is not a factor of the number, then write the number in the row below as it is. Continue the steps until all co-prime numbers are left in the last row. Two numbers are said to be coprime if they share no common factors other than 1. 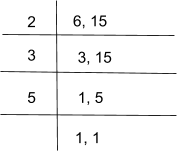 Step 3 - The LCM is the product of all the prime numbers.

Here is how Cuemath students learn to visualise LCM

Experience this in a Cuemath class. Book a Cuemath demo class with a nearby centre.

Addition and Subtraction of Fractions