Multiplication and Division of Algebraic Expressions

Go back to  'Algebra Basics'

Rules of working with variables

Look at these three examples for a quick recap of the rules of dealing with variables.

How to Multiply a Monomial by another Monomial?

These examples cover all the rules you’ll need to know for multiplying monomials.

How to Multiply a Monomial by a Binomial?

These examples cover all the rules you’ll need to know for multiplying a monomial with a binomial.

When multiplying a binomial with another binomial, you will get 4 terms initially, as shown by the arrows in the example below. These terms may simply so the final answer may have fewer terms. 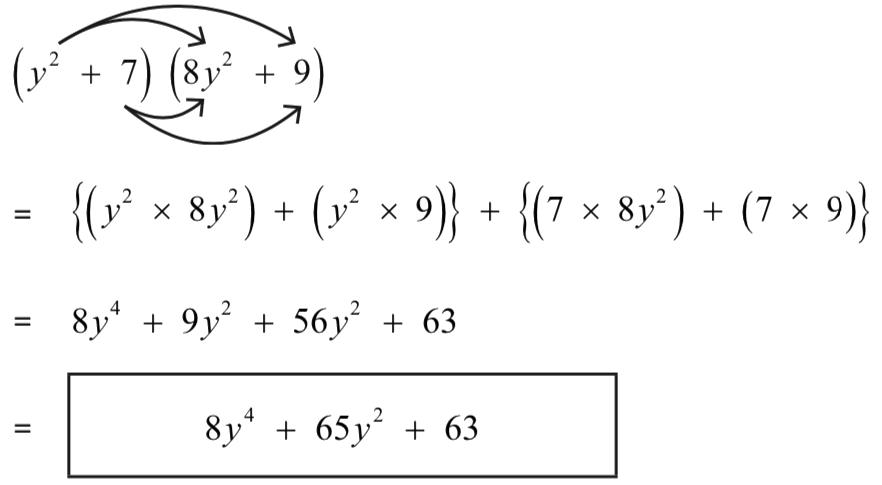 Consider the multiplication of a binomial and a monomial:

We visualise \(a\) as the breadth of a rectangle and \((a + b)\) as the length. So their product will be the area of this rectangle.

So, the area of the rectangle is the sum of all its parts. That is:

Now let’s visualise the multiplication of a binomial with a binomial: 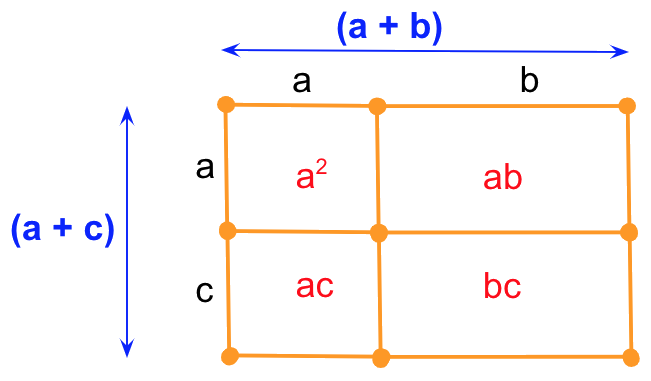 So, the area of the rectangle is the sum of all its parts. That is:

How to Divide a Monomial by another Monomial?

Think of division of algebraic terms like you would think of fractions. So, to divide \(9y^5 \) by \(3y^2 \) begin by writing the expression as a fraction:

Recall the steps to reduce a fraction to its lowest or simplest form. We identify common factors and divide both numerator and denominator by it. We do something similar here.

We see that \(3 \times y \times y \) is common to both the numerator and denominator.

Cancelling (or technically, dividing both numerator and denominator by) the common term gives us:

How to Divide a Binomial by a Monomial?

When working with whole numbers, dividing the sum of two numbers by another number is equivalent to dividing each number by the divisor.

We will divide each term from the binomial by the monomial.

This gives us two monomial divisions which we already know how to do. So, the answer is:

Tips and Tricks to Multiply and Divide Algebraic Expressions