Go back to  'Ratio, Proportion, Percentages'

When 3 litres of yellow paint is mixed with 2 litres of red paint, the result is perfectly orange paint.

Will mixing 3 litres of yellow paint with 3 litres of red paint also result in perfectly orange (PO) paint? The answer is no.

A ratio tells us how much of the proportion of one thing to the other.

The sequence (or order) in which the numbers in a ratio are written matters. For example, the ratio of the yellow paint to the red paint paint is 3:2 and not 2:3. Why? Because yellow paint will always be 1 portion more than the red paint.

Ratio of 3 quantities can be expressed as,

Equivalent ratios and the simplest form of a ratio

Nina's fruit-basket has 20 apples and 15 oranges in it.

The basics of proportion 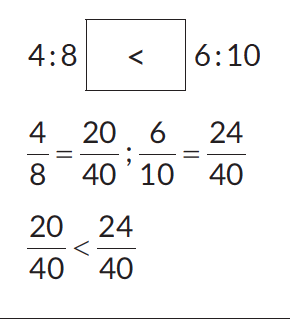 Division of a quantity in the given ratio

Let’s try and understand this using an example.

How much money does Mia receive?

How much money does Isha receive?

In the example given we calculated Mia’a and Sita’s share from the total.

Example: The price of a pen is ₹12. The table below shows the number of pens bought by Dev and their price.

When the ratio of one quantity to the reciprocal of the other quantity is constant, the two quantities are in inverse variation.

This is written as \(\begin{align}N ∝ {1\over D},\end{align}\) read as “N is inversely proportional to D” or “N varies inversely as D”