Introduction to Reading a Calendar

We learnt the concept of time and understood the four measures of time – seconds, minutes, hours and days. 60 seconds make a minute, 60 minutes make an hour, and 24 hours make a day.  But what happens when we need to describe more significant chunks of time? Say you have music lessons every Tuesday. How frequently would you say you go to music classes? Once in 7 days, correct? What would you say in November about your examinations which are in December? You would say that there are 30 days left, right? But wouldn’t it be difficult to describe these amounts of time in seconds, minutes or hours?

Let us say you go for music lessons after seven days. So how many seconds is that

So instead of saying that you go to your music class once in 604800 seconds, you can tell you go once a week, which is equal to seven days.

How about your examination which is 30 days away? How many minutes is that equal to

Isn't it more convenient to say that your exam is a month away than saying it is 43200 minutes away?

The Big Idea: What is a calendar?

We already discussed weeks and months as units of time. These are not enough. There are 12 months, from January to December, and after these 12 months get over, we again start over with January. So, this set of 12 months is collectively called a year, and a calendar represents each such year. 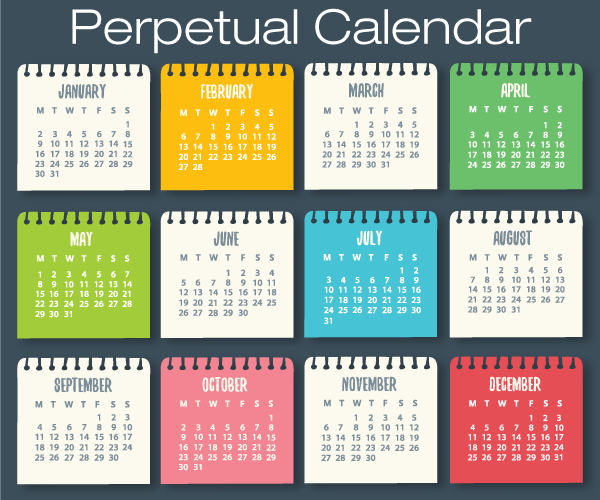 So, a year has 12 months, each month has 4 or 5 weeks, and every week has seven days. In the last exercise the largest unit of time we encountered was a day, and in a calendar, the day is the smallest unit that is seen, and the other units are week and month.

The Importance of a calendar

A calendar usually has 12 pages, with one page for each month. The 12 months in a year are:

Every month has 4 or 5 weeks, and each week has the following 7 days – Sunday, Monday, Tuesday, Wednesday, Thursday, Friday, and Saturday. Sundays are usually marked in red on some calendars, while some calendars also have Saturdays marked in red.

Several things are scheduled as per the time of the year or by month. For example, seasonal activities related to agriculture or festivals have a longer cycle and need to be marked on a calendar. These are not measured in hours or days, but in the more extended periods, we mentioned, like weeks and months.

Days in a month

One of the most interesting things about a calendar is that although there are 12 months, all months do not have the same number of days. There are months with 30 days and also 31 days, and February usually has 28 days. These are the number of days in a month:

As you see above, it seems as if the 30 days and 31 days months alternate, but it is not uniformly true throughout the year. The knuckles on our fingers provide a very easy way to remember which month has how many days. Fold the fingers of your left hand into a fist and start counting the months from the first knuckle of the index finger. Once you reach the knuckle of the little finger, begin counting backwards again till you reach the knuckle of the index finger. So the raised knuckles stand for 31, and the troughs between two knuckles stand for 30. If you put both left and right hands together, then you can count in a line without needing to count back again. Here is how it looks. 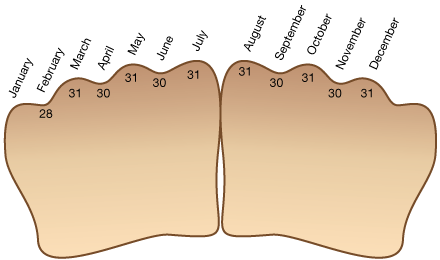