Go back to  'Exponents, Squares, Cubes'

Introduction: Have you played chess or seen a chessboard? It is a unique arrangement of black and white squares. There are eight squares on one side. If someone asks you how many squares there are on the chessboard, you can count the number and come up with the answer. Or you can multiply 8 by itself to get the square of 8 and say the right answer 64. Let us take another example. Say you have a square of side 5 cm. The area of this square would be the square of 5, which is 25. A simple idea: The Most Common Exponent

When a number is multiplied by itself several times, it is said to be raised by its exponent. So, if you multiply the number 3 by itself four times, you would write it as 3 x 3 x 3 x 3 or 34. Here the answer is 81, and the number 4 is referred to as the exponent of 3. 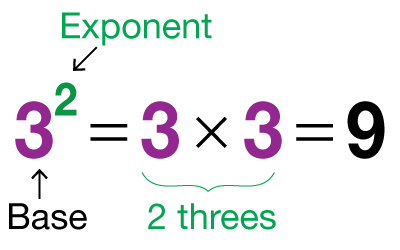 We know that a prime number is a number which is divisible only by 1 and by itself. So, 2, 5, 7, 11 are all prime numbers. And we also know about the process of factorisation in which a number is broken up into several numbers which when multiplied together give that number. Let us see the example of how to factorise 42

All of the above numbers 2, 3 and seven are referred to as factors of 42, and incidentally, they are all prime factors as well, which means all the factors are prime numbers.

When a square number is broken into its prime factors, it helps to find the square root as well. Let us take the example of 144, which is the square of 12.

Therefore, by breaking up 144 into its prime factors, we can know that it is the square of 12, so its square root would be 12.

Step 1: Group the number whose square root is to be calculated into pairs starting from the units place. These groups are called Periods.

Step 4: Repeat the first three step till all the periods have been covered. If the number is a perfect square you won’t need to go into decimals. If in case it is not a perfect square, place a decimal point and start creating periods of TWO ZEROES each for every decimal place in the quotient until the remainder of zero is obtained. Ignore the 5.
Multiply the rest of the number by its successor.
Attach 25 at the end of this answer and you have your square!