Go back to  'Addition & Subtraction'

Let's try and understand what subtraction is. As you can see in the image given below there are 3 oranges kept in a plate. If we take away one of them how many would be remaining. 2 Oranges would be left in the plate. This act of 'taking away' is known as 'Subtraction'. Subtraction is a basic arithmetic operation that we need every day in our lives.

The act of 'taking away' a certain number of objects from a collection of objects is called 'subtraction'. Suppose there are 25 people travelling on a bus, and 3 people get off the bus at a stop. To know how many people are still on the bus you would have to subtract 3 from 25. The subtraction statement given below would show this. 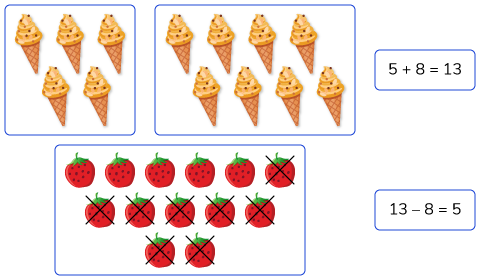 So, in order to subtract 234 from 1568, you write both the numbers one below the other in such a way that the place values are all aligned. So, it would look like this:

Here is an interesting way to visualise subtraction. Know what happens when you borrow while subtracting numbers.

The concept of borrowing

But what if we had to subtract 268 from 1534? In that case, the numbers would be written in this way

As you can see above, a ten has been borrowed from the 3 tens so now the tens place has 2 tens, and the 4 in the unit’s place becomes 14. Now 8 can be subtracted from 14 to give 6 which is written down as the first step.

Next, we see that in the tens place 6 can’t be subtracted from 2, so we borrow one from the hundreds place, and now this is how it would look like,

This generally happens once again due to an incomplete understanding of place values. Rather than telling students to simply align numbers from the right, it is better to ask them to model this problem using Base-10 blocks, so they understand why the numbers are aligned from the right.