NCERT Class 7 Maths The Triangle and Its Properties

The chapter 6 begins with an introduction to triangles and its properties by explaining the elements of the triangle such as three vertices, three sides and three angles.Then the concept of medians and altitudes of a triangle are discussed in detail.Exterior angle of a triangle and its property is dealt in the next section.Similarly, the angle sum property of a triangle is described in the following section.After this, the two special triangles namely equilateral and isosceles are explained in detail.The sum of the lengths of two sides of a triangle is the next topic of discussion. The very important and interesting Right-Angled Triangle and Pythagoras Theorem is explained in the last section.

Download FREE PDF of Chapter-6 Triangle and Its Properties 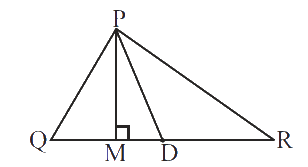 Let’s visually model this problem .There are three operations that done in sequence. First, check \(PM\) is perpendicular on \( QR\) or not,then check \(PD\) divides \(QR\) in equal parts or not and then find the mid-point of \(QR\).

Draw rough sketches for the following:

Rough sketch for given statement. 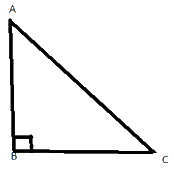 \(YL\) is an altitude in the exterior of triangle \(XYZ\) 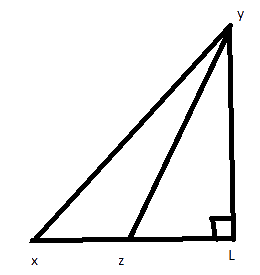 Verify by drawing a diagram if the median and altitude of an isosceles triangle can be same.

If the median and the altitude of an isosceles triangle can be same.