The Crow and the Fox

Read the story on the Crow and the Fox with Illustrations

Once upon a time, there was a forest where only animals lived and no humans ever entered. All the animals lived peacefully and they all had different characteristics, for example, the monkey was the naughty one, the chipmunk was the wuss, the lion was brave, the gazelle was fast, the turtle was slow, the fox was the cheeky one and the bees were the hard-working ones

The only one that no animal in the forest could get along with was the arrogant crow. The crow did not like to share his food. Sometimes he even stole food from the other animals and flew away. All the animals were talking about the selfish crow and wanted to teach the crow a lesson. Being the cheekiest and the smartest one, the fox made the first comment “ You guys leave it up to me. I will do such a trick on that selfish crow that he won't be able to be an arrogant snob anymore".

One day the crow went into the city to look for food and he returned to the forest with a big chunk of cheese in his mouth and rested on a branch. Watching from afar, the fox decided to make a move to take the cheese out of the crow's mouth.

The fox came next to the tree on which the crow was resting and asked “ Hi! My friend, what is it that you are eating? I have never seen anything like that."Crow replied, “They call it cheese, the humans eat this.”

Fox said, ”I'm curious about its taste. Would you share some with me?”

Crow replied, “No way! Do you know how far I had to fly to get this cheese? ”

Fox said, “So what, one day I will share my food with you and will be even.”

Crow said, “And why would I care about your filthy food? This cheese is very special.”

Fox said, “You can find it anytime you want.”

Crow replied, “whatever, I am not giving this to you.”

The fox could not convince the crow to share his food. The fox was smart but the crow was just as smart.

So this time the fox made another plan and said “ Okay! Okay!  have your cheese I don't want it but at least let me come next to you and have a look at this very special cheese that you don't want to share.”

When the fox started to grab the tree the crow took the cheese in a panic and flew to another branch. This time the fox went under the other tree where the crow was but the crow had no intention to share his food.

The fox gave it a little thought and came up with another plan: what are the most important flaws of the crow? He's self-conscious and arrogant. Maybe I should take advantage of these to get that food from him. 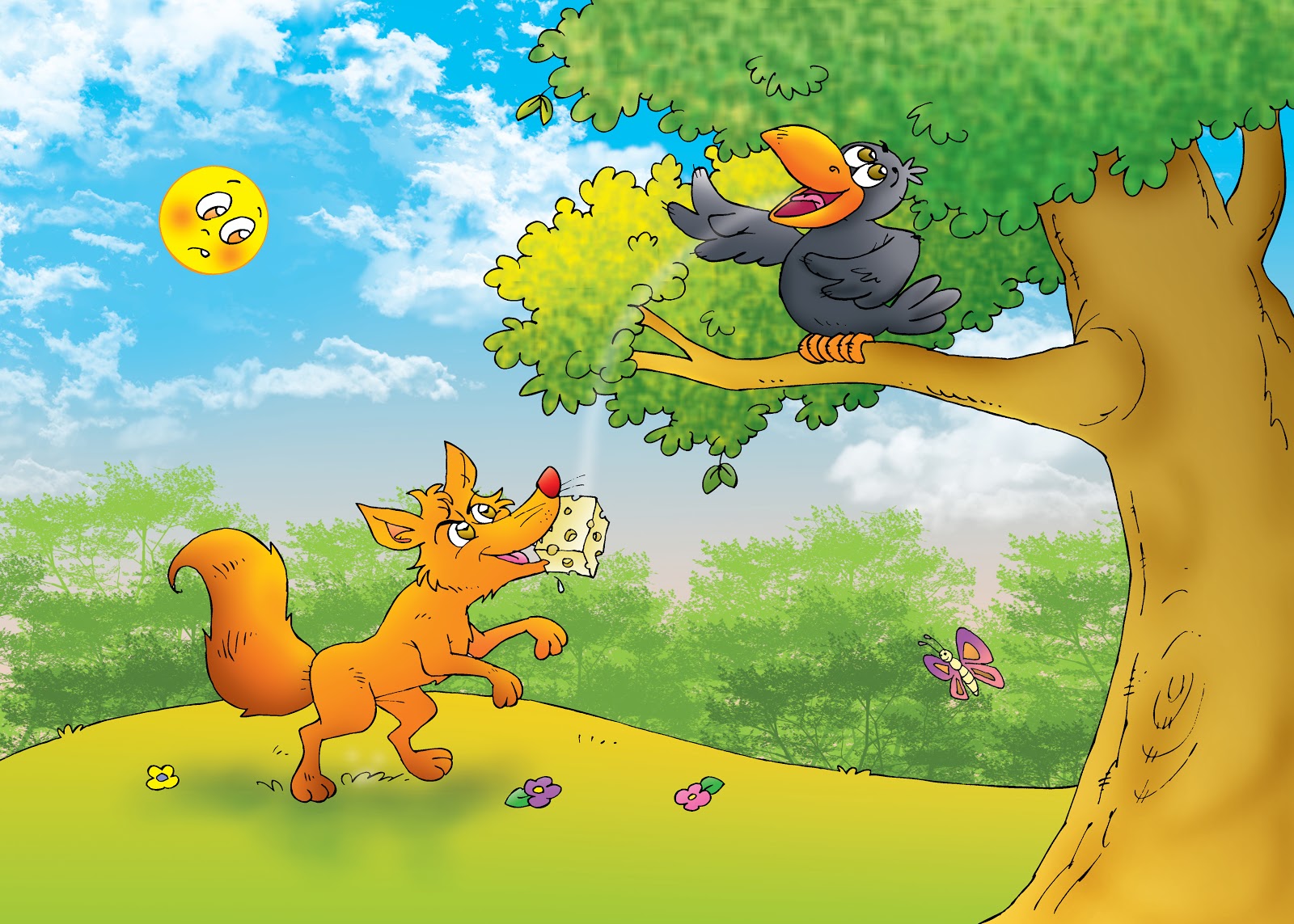 Fox said “ Hey! my friend do you know why I came down here?”  to prevent losing the cheese in his mouth he asked without opening up his beak, “ why?.

The fox answered, “ What I have heard is that you have the most beautiful voice in the forest, and apparently when you sing all animals watching get mesmerized.” When the crow heard this he fluffed his feathers and started to look very sure of himself.

The fox asked, “ Sing me a song so that I can hear the magnificent voice of yours and tell about it to my friends.”

The fox finally found the crow's weakest points when the self-loving crow opened his mouth. The cheese in his mouth fell down and of course, the fox was right there to catch it. The crow was stunned motionless.

Due to his arrogance and self-consciousness, the crow lost his food to the fox. Moral of The Crow and The Fox- Never fall for flattering words. In this story, the crow gets influenced by the fox and is blinded by false appreciation. Never trust anyone blindly.