Read the story on the frog prince with Illustrations

Once upon a time, there lived a beautiful princess in a big Castle. One day, her father, the King, brought her a golden ball as her birthday present. The princess loved the golden ball; she started to spend all her time playing with the ball in the garden.

One day she went out with her golden ball and started to play with it tossing it around. The princess came next to a little pond and kept on playing with the ball which fell into it.

The princess sat down next to the pond and desperately started to cry. Suddenly, she heard a voice and looked around. She could not figure out where the voice was coming from. When she looked closely, she realized the voice was coming from the frog that was next to the pond looking at her. The frog leaped towards the princess and asked again after he got closer, “what’s wrong, my beautiful princess? Why are you crying?”.

The princess got stunned when she saw a talking frog “A talking frog, how can that be.” “Tell me, why are you crying?” asked the frog.
“The golden ball that my father gifted fell in the pond. It's already at the bottom of how I am going to get it back”, wept the princess.

The frog came next to her feet and made her an offer and said, “My little princess, I will bring back your ball but in return, I will need you to do me a favor.” The princess was curious so what’s the favor. “If you accept to be friends with me, I would like to live with you in the castle”, said the frog.
The princess thought about it and accepted his offer, so the frog jumped into the water and went out of sight. A while later, he appeared with the golden ball and threw it to the princess with happiness and started to walk back to the castle.

Seeing the princess leave the frog behind, the frog yelled at her. “Princess, you forgot what you promised.”
The princess laughed “How can an ugly frog like you even imagine living with a beautiful princess like me”
The princess left the frog right there and went back to the castle.

In the evening, the King, Queen, and the princess sat down at the dinner table. Right, when they started to eat; they heard a knock on the door. The maid told them it was a frog whom the princess had invited. The King was surprised and asked his daughter, “Would you like to tell us what’s going on, my daughter.” The princess told about all that happened in the morning at the pound. If you promised the frog to save your ball, you must keep your word for it.

The King ordered the maid to welcome the frog inside. A while later, the door opened, and the little frog came in, leaping, and stopped next to the dinner table. “Good evening, everyone thanks you, my King, for letting me in.”

The frog started to eat from her plate. The princess was really upset with him, but she thought that he would leave after dinner. But the frog had no intention of going after the dinner and followed the princess to her room.

Time passed, and the frog got sleepy. ”Good night, princess. I am tired. I would like to sleep in your bed if you don’t mind.” Said the frog.

Afraid to upset her father, the princess had to say yes to that; the frog jumped on the bed and put his head on her soft pillow to try not to share her anger. The princess laid next to the frog and slept.

At sunrise, the frog woke the princess up. “Good morning, princess. I have one more wish from you; if you do that, I will leave right away.” Hearing that the ugly frog would leave soon, the princess was pleased without making it obvious.

“I want you to kiss me, my princess,” said the frog. The princess jumped out of her bed furiously and screamed, “how dare you! that is impossible!” The smile on the frog's face disappeared, and instead, a tear dropped down his cheek. The princess thought for a while. “Oh well, what’s the big deal with one tiny kiss? I wouldn’t see him ever again,” so she kissed him. 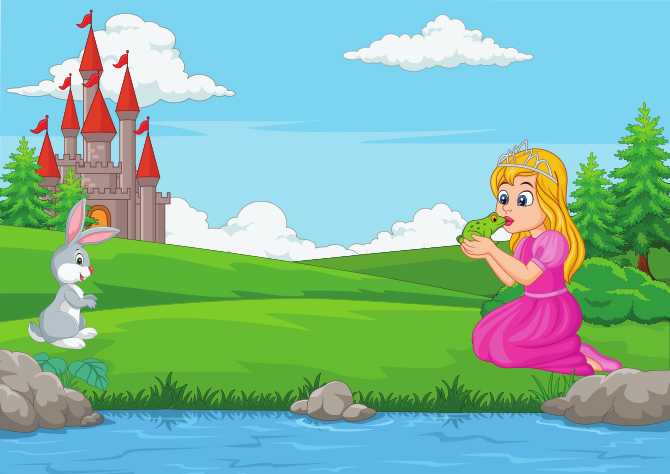 As soon as she kissed the frog, a bright white light covered the room. Right where the frog was standing a moment ago, there was a very handsome man. Instead, the princess was stunned by what she was seeing. She couldn’t believe her eyes, so she asked, “Who are you? What happened to the frog?”
“My beautiful princess, I am the prince of the land far away. A witch cursed me and turned me into a frog. To break the spell, I have to spend one night next to a princess and get kissed by her. Thanks to you, I am being saved from being a frog forever.”

The princess was shocked but also pleased about what she heard. Hearing the whole story, the King told his daughter, “we should not evaluate anyone by their looks or judge without knowing the whole truth about them.” The Prince and the Princess went near the pond where they first met, and the prince asked her to marry him.

The princess smiled and nodded, accepting the proposal. After a short while, they got married and lived happily ever after.

Moral of The Frog Prince: Never judge anyone quickly based on their looks or judge them without knowing a complete truth.