The Princess and the Pea

Read the story on the Princess and the Pea with Illustrations

Once upon a time, there lived a Prince in a flourishing kingdom. Being a royal person, he received every kind of luxury right from his childhood. This led to him being fussy about tiny things. He was never pleased with anything offered to him until it was entirely up to his standards.

Eventually, the time for his marriage had finally come. So, the prince traveled around the world to find the right match for him. But unfortunately, he was never able to close the deal with anyone because of his nature. Something or the other was always a miss in all the princesses he met. So, he returned to his kingdom, disheartened.

One stormy night after the prince came back, he and his family were having dinner. Suddenly there was a commotion outside the door.

The Queen went to see what was going on.

“What’s the matter, guard?” asked the Queen to the guard. “There is a young girl at the door, Your Highness. She says she is a princess,” answered the guard. Intrigued, the Queen went to see the Princess.

When she got there, she saw a young girl drenched from head to toe. “Who are you?” asked the Queen. The Princess said, “I am a princess. I passed through when the storm and the lightning spooked the horses, and they dragged my carriage into slush and mud. My men are still repairing my carriage. I had walked many miles to reach over here.” 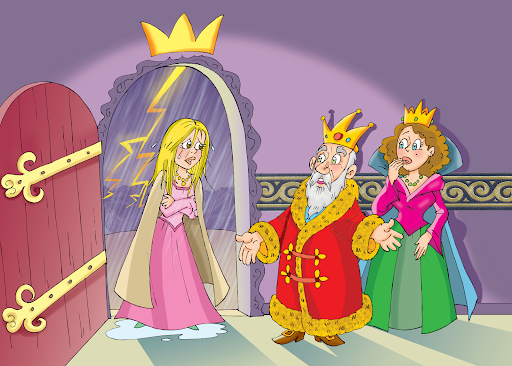 Anyone who looked at the girl could not believe she was a princess. She looked like a poor peasant girl with her hair disheveled and clothes and shoes full of mud. Anyway, the Queen allowed the Princess to stay in her palace and provided her with food and clothes. The Princess was very grateful to her.

Getting to know about the matter, the prince did not believe the girl to be a princess. “Her appearance betrays her. Her eyes shine with courage and there are humility and grace in her behavior, just like that of a princess. But still, we must be sure of that!” said the Queen.

After thinking a lot, the Queen came up with a plan. She went to the room where the maids were making the bed for the Princess. She ordered them to get twenty mattresses. Meanwhile, the Queen took out a pea from her pocket and placed it right in the middle of the Princess’s bed. Then, she ordered the maids to place all the mattresses on the top of the pea.

That night, the Princess slept on the special bed, but she had a sleepless night. She kept on tossing and turning all night long.

In the morning, she joined the Queen and the others for breakfast. The Queen noticed that the Princess looked tired from her eyes. She asked her about it. “Forgive me, Your Highness! I could not sleep all night. My bed was really soft, but something kept poking me in the back, and I have bruises all over.

The Queen smiled happily because she knew that the girl was a true princess. “Only a real princess who has all her life in comfort can feel a small pea kept twenty mattresses below her. And only a kind princess would not mention her discomfort unless asked to do so. The prince talked to the Princess for several hours and was very happy since he could relate a lot to her. Soon after, the prince was married to the Princess, and they happily lived in the kingdom where all the people loved and respected them.

Moral of The Princess and The Pea- "No matter wherever you go, people will always get to know about you because of your behavior. So, be you all the time!"