Read the story on The Sleeping Beauty with Illustrations

A long time ago there lived a King and a Queen. They wished for a child for a very long time. After a long long wait, their wish came true. A beautiful girl was born to the King and Queen. The king announced to the people,” We are blessed with a baby princess and her name is Sunshine”. “Hurray!” said the people. As the baby girl turned one, celebrations began all around. A big party had to be planned. The King decided to invite all the fairies, except the black fairy; whom he termed as mean and bad.

The party was a lot of fun. All the fairies brought with them some precious gift and blessed the little princess to be a clever and kind girl. Suddenly the castle was filled with blue smoke and nobody could see anything.

As soon as the smoke settled, the king and queen were shocked to see the black fairy. She saw that a beautiful celebration was organized and everyone from the kingdom was invited, including all fairies. She became very angry for not being invited and thus cursed the baby princess that on her 16th birthday before the sun sets; she would prick on a needle and die. Everybody was shocked. Suddenly, a young fairy, who had not given her blessings to the young princess, said that she can’t take away the black fairy’s curse, but she could definitely help. She went on to add that when the princess pricks herself, she won’t die, instead would go into a deep sleep and shall only awaken with a kiss from a prince who loves her.

The king ordered the destruction of all spindles and needles from the kingdom. Soon, there were no sharp things in the castle. Except for one, they didn’t check in the towers. As years passed by, the baby grew under the supervision of fairies and turned into a very beautiful young girl. When she turned 16 while roaming in the castle one day she saw a magical light ball and followed the light ball. The ball took her to the top of the tower. Inside there was an old woman bent over a spinning wheel. 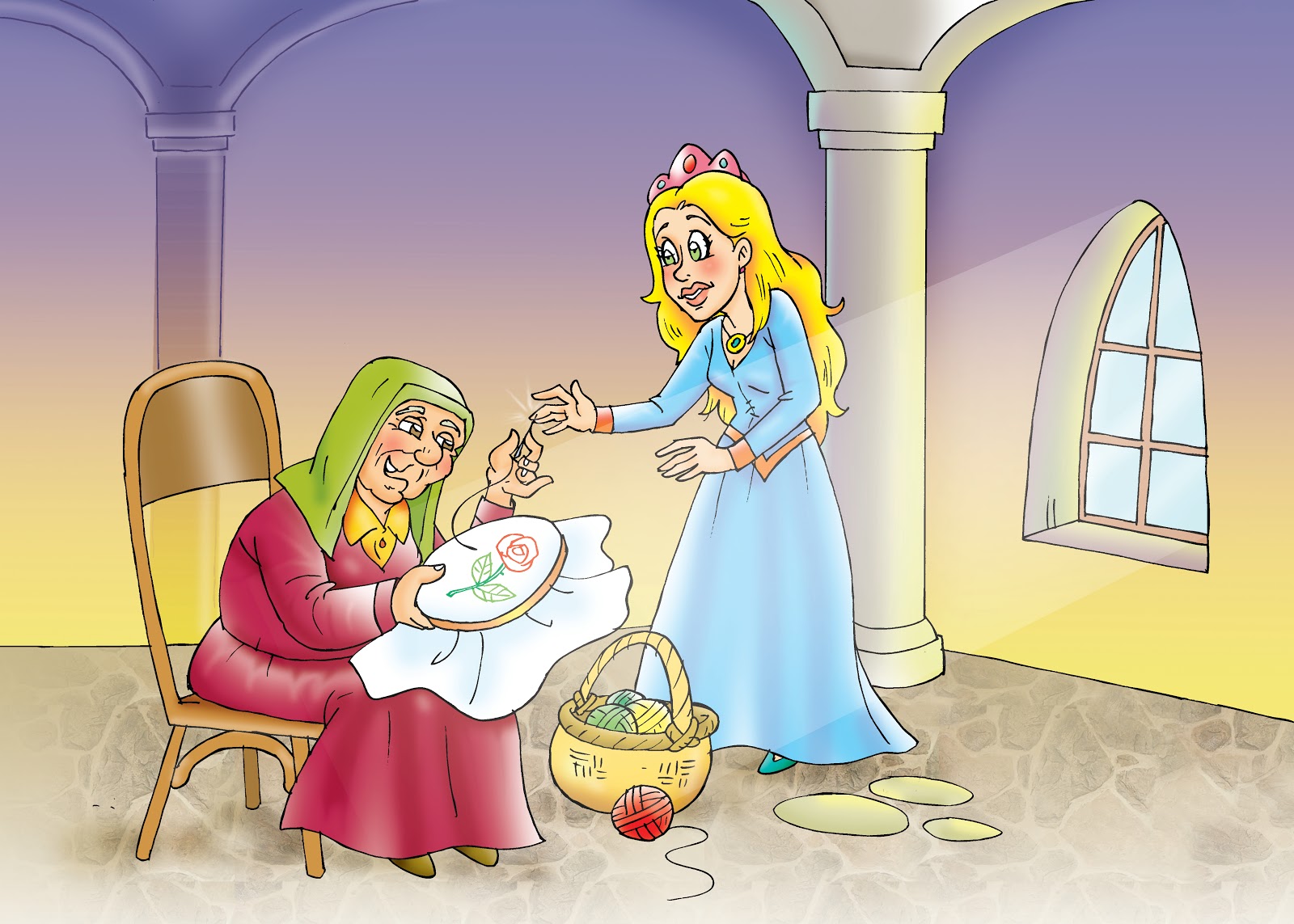 The king who remembered the words of the last fairy, made her daughter lie in her room for many years to come. Fairies saw the princess sleeping and everyone thought that she was extremely beautiful. They all said at once,” Sleeping Beauty”. Soon this name became popular in town and everyone started to mention the princess as the sleeping beauty. The whole kingdom was sad, fairies noticed this and decided to let the whole kingdom fall asleep so that when the princess was woken up by her prince, she wouldn’t be alone. Everyone in the kingdom fell asleep.

About hundreds of years later, a handsome prince was riding through the forest. He saw the strange looking castle. The accompanying soldiers told the prince that this was the castle of the sleeping beauty. He had heard stories of the sleeping beauty and started to explore it. He saw a big pink door which was difficult to open, as it was closed for so many years. After trying hard, he managed to open the door and to his surprise he found sleeping beauty lying on a beautiful bed in that room. The moment he saw her he just fell in love with her. He leaned down and kissed her. Instantly the kiss lifted the spell and the princess woke up. The king, the queen and all the people and animals were awake again. The kingdom was full of joy and there were celebrations all around.

Moral of the sleeping beauty: No matter if bad people think bad for you, there are always some well-wishers to help you out.