Read the story on the thirsty Crow with Illustrations

It was a hot summer day. A crow was thirsty from the scorching heat of the sun. He flew to the villages and towns in search of water but he could not find any. He flew miles but he didn’t find any sign of water. He became so thirsty that he felt like he was dying. He found several wells but all of them were dry. Then on a maize farm, he found a pot in which there was little water at the bottom. But, he couldn’t reach the water as it was very scarce and too deep inside. He tried to break the pot with his beak. He even tried to overturn it, but he was unsuccessful in all attempts to get water. He became disappointed and was thinking of fleeing to another place in search of water. But sitting over there, he suddenly saw a few pebbles lying around and he got an idea. He started collecting those pebbles and dropped them into the water. The water slowly started rising as he dropped more and more pebbles. After some time, the water rose to the level from where he could drink it. The crow drank the water till he quenched his thirst and he flew away. 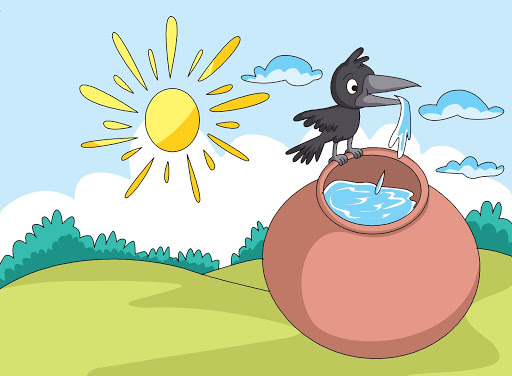 Moral of The Thirsty Crow- This story teaches us that if you try hard, there is a solution to every problem. “Where there is a will, there's a way.”