Kilometer is a unit used to measure length or distance. It is a unit used in metric system. The distance can also be measured in miles, which can be expressed in terms of kilometer. Though miles and kilometers represent the same quantity, their value differs. In this chapter we will also find the relation between kilometer and many units like, miles, meters, centimeters, feet, milimeters. Stay tuned to learn more about kilometers!

As per the kilometer definition, km is used to express the distance as an SI unit. A mile is a unit followed in the United States for measuring distance. The metric unit followed in the United States is called the "United States Customary Units (USCS)". Even though kilometers and miles are used for measuring the same unit (distance), the value differs. Although kilometer is not a unit of the American metric system (USCS), it is frequently used in the field of science, medicine, and military forces.

Conversion is needed wherever long distances are measured. In this section, we will learn the relation between kilometers and other units of distance like, meters, centimeters, millimeters, miles and feet. We will also learn how to convert other units to kilometers too.

Meter is a SI unit of distance. It is abbreviated as m. The relation between kilometer and meters is given as, 1 kilometer (km) = 1,000 meters (m).

Similarly, it is possible to convert kilometer to USCS units, miles and feet.

Miles is the USCS unit mainly used to indicate distance. It is abbreviated as "mi". The relation between kilometer and miles is given as, 1 km = 0.62137 mi.

Feet is also the USCS mainly unit to indicate length. The singular unit for feet is given as foot. It is abbreviated as "ft". The relation between kilometer and feet is, 1 km = 3,280.84 ft.

Now, that we have learned to convert kilometers to the units like meters, centimeters, millimeters, miles, and feet. Let us try converting these to kilometers. 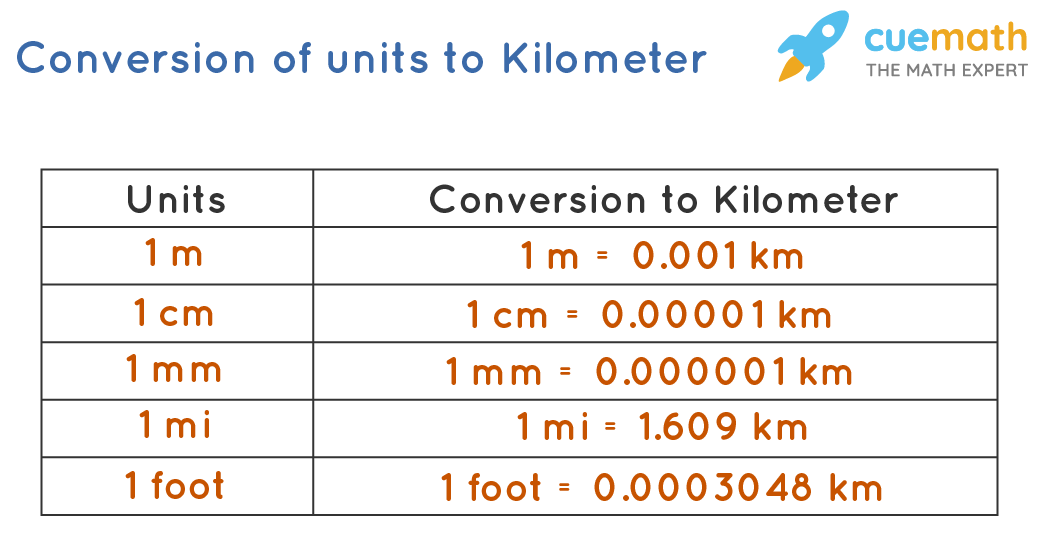 What is the Kilometer to Miles table?

Is Kilometer Larger Than a Mile?

1 mile equals to 1.609 km, which signifies that a mile is larger than a kilometer.

What is 1 KM Equal to in Meters?

What is 3 Kilometers in Miles?

How Many Kilometers Makes 1 Mile?

How Long is a Kilometer in a Feet?

Is 2 KM Longer Than a Mile?